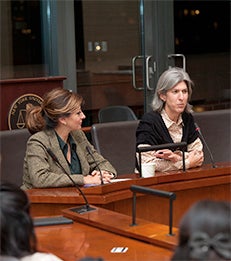 [Zalaznick] attributed part of her success to building and trusting her teams, and recognizing leadership skills in others.

Lauren Zalaznick, Executive Vice President of NBC Universal (NBCU) and former head of NBCU’s Bravo Network, recently spoke to NYU Stern Adjunct Professor and CNBC’s Maria Bartiromo about her career path in media, her leadership style and her efforts to champion women in the workplace. The Stern course, “Global Markets, Human Rights and the Press,” is co-taught by Bartiromo, and Professors Michael Posner and Bruce Buchanan.

Zalaznick recounted her way to the top, describing her early career years as an independent film producer and her time rebranding VH1 in the mid-90s. She eventually moved onto Universal and started the TRIO network, and in 2004 earned the opportunity to run a number of networks including the Bravo Network, which is currently the market leader in delivering reality television content.

When asked about being a female in the media industry and working with legendary (male) executives including Barry Diller and Jeff Zucker, Zalaznick reminded the students that they “have to work really hard to achieve success.” She attributed part of her success to building and trusting her teams, and recognizing leadership skills in others. And in an effort to champion women in the workplace, Zalaznick has instituted and led women’s initiatives at NBCU.

“Global Markets, Human Rights and the Press,” is offered through the Business and Society Program (BSP). The purpose of BSP is to ensure that every Stern student graduates with a strong understanding of his or her responsibilities as a business professional, and with a keen appreciation for the role of ethics and law in creating and maintaining efficient markets and best business practices.
Share / Print