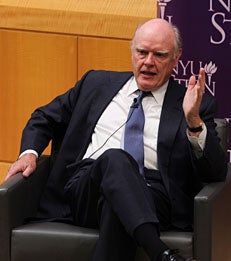 The Honorable John Snow, who served as the 73rd United States Treasury Secretary from 2003-2006, sat down with Martin Lipton, chairman of NYU’s Board of Trustees, for a frank discussion on the state of world markets and what’s ahead for the global economy.

Before an audience of 150 students, faculty, alumni and members of the community, Secretary Snow shared his views on the roots of the financial crisis, the impact of today’s paralyzed Congress on the US economy, the importance of US-China economic relations, the outlook for the euro and the future of shipping and rail transport in the US. 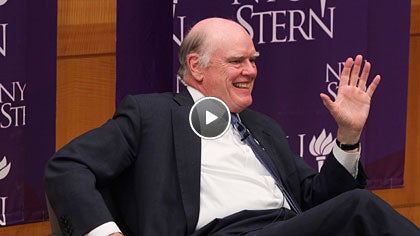 Looking at the causes of the economic crisis starting in 2008, Secretary Snow explained that you could point fingers in many directions, including US housing policy, global imbalances and the regulatory system. Referring to the current state of the economy as “The Great Adjustment,” he explained that monetary policy is “out of bullets,” because interest rates can’t get any lower. He went on to say that fiscal policy is not an option for policy makers right now, in light of the country’s recent credit downgrade, and that today’s economic malaise will last for as long as five-to-ten years.

Pointing to the chasms in today’s political landscape, Secretary Snow called the environment in the US Congress poisonous and hostile. “We’ve lost the civility,” he explained. “There isn’t the lubricant of goodwill anymore, so it’s impossible to get anything done.” 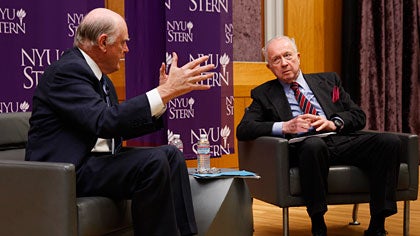 The Honorable John Snow and Martin Lipton, chairman of NYU's Board of Trustees

Going beyond our borders, Mr. Lipton steered the conversation to China’s growing economy. Secretary Snow stressed the importance of the relationship between the US and China, saying that avoiding policy mistakes in US-China economic relations will be critical to maintaining global economic growth. China, he claimed, is not the biggest threat to the US. Instead, he argued, the United States’ own inability to take action is holding the country back.

Turning his attention to the uncertainty surrounding the European Union, Secretary Snow noted that the euro was intended to encourage fiscal convergence among European countries, but instead it has become the source of divergence. He urged the EU to look at American history, particularly the actions of Alexander Hamilton, for clues as to how to save the union and the currency.

Referencing Secretary Snow’s professional background, which included stints in the Department of Transportation and as the head of a global transportation company, Mr. Lipton asked about the future of railways in the US. Secretary Snow praised the country’s freight railway technology as being a global leader, with the lowest cost per ton hauled in the world. Passenger trains, on the other hand, he explained, have room for improvement in the US. He argued a case for investment in high-speed rail service in certain corridors of the country, including the Northeast, while admitting the challenges of securing political consensus to support this.

Ending on a lighter note, Secretary Snow offered some advice to studen ts in the audience. “Don’t get disheartened,” he said. “Being at NYU, you will be deeply enriched with a form of capital that’s irreplaceable – knowledge and the ability to get knowledge.”
Share / Print