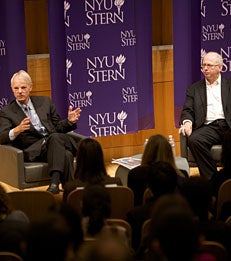 In conjunction with The Economist's special report on the “Future of Jobs” (September 2011), Nobel Laureate Professor Michael Spence and Matthew Bishop, US business editor and New York bureau chief at The Economist, discussed recent trends in the job market, both in the US and around the world, before an audience of nearly 300 students, alumni, faculty and members of the community in NYU Stern’s Paulson Auditorium. Drawing from his recent book, The Next Convergence: The Future of Economic Growth in a Multispeed World, Professor Spence described the state of the labor market in the US and discussed the implications of rapid growth in emerging countries. Bishop, who authored The Economist’s special report, pointed to winners and losers in the global job market, labor market trends and the role of government policies. 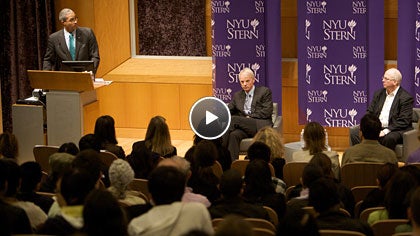 Watch the event video
Referencing his research, Professor Spence explained how the US has not seen any job growth in the tradable sector (e.g., manufacturing), but rather only in the non-tradable sector (e.g., healthcare, construction), in the last 18 years. Comparing the US and Germany, Professor Spence noted one significant difference between the two labor markets: “Germany’s tradable sector remained an engine of growth over the last two decades,” attributing this to the Germany’s post-reunification policies.

Bishop described the mismatch between today’s labor market and workers, pointing to two very different realities: (1) skilled and talented workers who are scarce will benefit from a great number of employment opportunities; whereas (2) low-skilled workers face a grim outlook with few job prospects. In light of this “Great Mismatch,” as Bishop calls it in The Economist’s special report, developing countries are becoming less competitive in global labor markets. 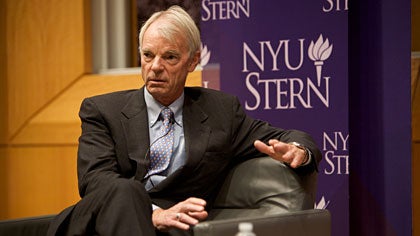 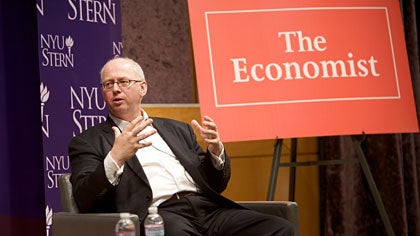 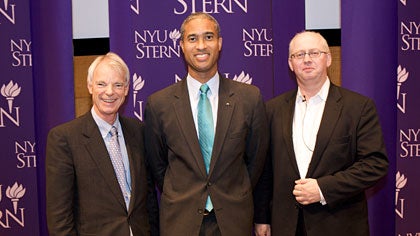