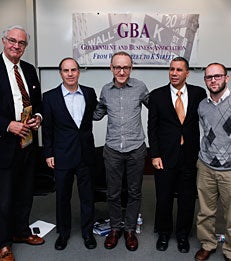 Dean Adam Brandenburger: It has been said that this may be the greatest social unraveling since the Great Depression.

David Patterson: Revolutions begin with hope, and when you have it, it’s precious.

Professor Roy Smith: We’re dealing now with a fear that our economic system has become unfair and uneven, and we don’t know who to blame.

Andrew Serwer: The one percent needs to face a tax increase…it goes a long way to addressing the notion of unfairness in our society.

Justin Wedes: We are a young movement. To see in two short months a group of a few people in a park turn into thousands across the world…I think speaks volumes to what we’ve been able to accomplish without specific demands…the demands will come and will be created collaboratively.
Share / Print