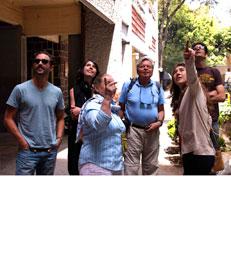 No other MBA program has an urbanization program like Stern’s, and this project has been a fulfillment of why I came to the School. - Laura Fox, MBA Student
MBA Students David Baharestani, Laura Fox & Craig Johnson’s Stern Signature Project (SSP) with the Urbanization Project & Marron Institute impacts policy change in Mexico City
“The housing supply in Mexico City meets only 50 percent of the current demand,” MBA student Craig Johnson explains. “And the backlog builds each year so it will get worse over time. Cities all over the world are experiencing similar challenges, particularly in the developing world, and we had the opportunity to develop a new solution.” During the Spring 2014 semester, Craig and two of his classmates, David Baharestani and Laura Fox, worked with Urbanization Project Research Scholar Alain Bertaud and Marron Institute Research Scholar Alejandra Rangel Smith on a Stern Signature Project (SSP) to contribute to the Marron Institute's efforts in Mexico City, under the leadership of Paul Romer, Director of the Urbanization Project and Interim Director of NYU's Marron Institute on Cities and the Urban Environment.

In May, the students traveled to Mexico City with Bertaud and Rangel Smith to tour residential zones and present their findings to Commissioner Simón Neumann, head of the city's Ministry of Urban Development and Housing (SEDUVI).

“The focus of our project was to analyze Mexico City’s zoning regulations and assess their impact on the affordable housing supply,” Laura describes. The students designed two models based on Bertaud’s theories. “The models consider both affordability and the lack of housing supply,” David explains. “The first model uses a market-based approach to show the effects of relaxing regulations. The other model uses Mexico City’s proposed Inclusionary Zoning ordinances to show what would happen if the city added these additional regulations designed to encourage affordable housing. The models look at a random sample of 100 lots and estimate how many housing units can be generated based on the zoning regulations. They also estimate which lots residential developers would actually purchase and develop, based on local pricing information. Using the models, it became clear that housing development was being constrained by the density restrictions Mexico City imposed in 2005. In our presentation to SEDUVI, we demonstrated that the city could significantly increase the affordable housing supply by easing restrictions on population density in certain neighborhoods.”

The students’ efforts on the project paid off: “Thanks to the team’s work, SEDUVI decided to eliminate density restrictions within the areas of the city covered by their Inclusionary Zoning proposal—a regulatory change that is in the process of passing through local legislation,” Rangel Smith reports. “This could have a huge impact on the production of housing, especially housing for middle and low-income residents—the groups targeted by the Inclusionary Zoning norm.”

“We are affecting a longer-term momentum shift here,” Laura adds. “As MBAs we all want to be ‘boots on the ground’ and to get this tangible experience has been really meaningful. No other MBA program has an urbanization program like Stern’s, and this project has been a fulfillment of why I came to the School.”

“It feels incredible to know that our work with the Urbanization Project and Marron Institute influenced high-level decision making in one of the world's most important cities,” says Craig. “By taking a big problem and breaking it down into something actionable, we’ve translated changes in regulations into both financial and human value.”
Share / Print ▼