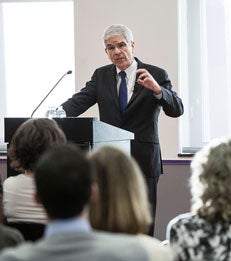 Here was an institution that was ready to be bold and to fully commit to studying cities.

Katherine Fleming, deputy provost and vice chancellor for Europe at NYU, welcomed guests and shared some background on University Professorships, which are awarded to outstanding scholars whose work possesses a significant interdisciplinary dimension. “Professor Paul Romer is one such scholar,” said Fleming. “He has the unique ability to bridge the divide between the civilian world and the academic community.”

Dean Henry introduced Professor Romer as a colleague and fellow economist who reinvigorated the field of economic growth. “He was also one of the first professors to ‘flip the classroom,’” explained Dean Henry, “by requiring students to read and conduct problem sets before coming to class.”

“I made the right choice when coming to NYU,” said Professor Romer. “Here was an institution that was ready to be bold and to fully commit to studying cities.” He went on to address two questions: Why should academics study cities? And how?

With a nod to Pasteur’s Quadrant – a classification of research that seeks both to solve specific problems and to contribute to our fundamental understanding of the world – Professor Romer stressed that the abstractions that emerge from basic science are very powerful, but they need to prove their value in applications to the real problems that people face, as he put it, “forcing knowledge with a reality check.”

Turning to his own research, he argued that cities are an example of such abstraction: “They offer a powerful way of organizing our thinking and understanding complexities, and serve as an important intermediary between such other abstractions as nations and businesses.”

Examining Detroit, in particular, he pointed to the city’s high rate of crime as compared to other large metropolitan areas in the US. According to Professor Romer, the level of crime in a city has a direct impact on all aspects of life there, including the value of the land and the tax revenue that the city government collects. He also indicated that police practices are a much more important determinant of local crime than factors — like the availability of abortion — that are emphasized by academic researchers who are largely divorced from the practical question of how to prevent crime.

Before closing, Professor Romer hinted at several additional opportunities where work on practical problems could lead to good basic science, work on questions such as how to reduce urban air pollution or how to provide for the essential public spaces – sidewalks, roads, and parks – in the rapidly growing cities of low- and middle-income countries.