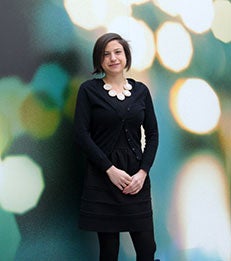 MBA student Julie Raskin takes on a new partnership role in the private sector, after a career in government.

When business is conducted the right way, it can be a tool for positive change. ...Doing good business is good for the world.

MBA student Julie Raskin takes on a new partnership role in the private sector, after a career in government.

“When business is conducted the right way, it can be a tool for positive change,” says second year MBA student Julie Raskin, who is transitioning from a career in government to a post-MBA role in the private sector. “Businesses pop up to meet a previously unmet need or solve a problem, and growth in business then creates new jobs, which in turn fuel more business activities, and more people’s needs are met. Doing good business is good for the world.”

Although Julie’s interest in business began at college, where she re-branded an organic food co-op and made it profitable, she decided to pursue her other passion of public service after graduation. “I was accepted into the NYC Urban Fellows program, and my experience completely shaped my worldview,” she says. As part of the program, Julie was given a nine-month placement with the Parks Department’s Office of Management and Budget, which led to a full-time position as an analyst and later a promotion to Deputy Chief of Staff.

In the Parks Department, Julie continued to contemplate the value of business and especially how the private and public sectors could work together to make a bigger impact. “Many of my government supervisors were movers and shakers from the business world,” she recalls. “I always jumped at the special projects that were involved in business. Managing an initiative to put Wi-Fi in parks, sponsored by AT&T, allowed me to try out a private-public partnership. I loved my role as mediator, liaising between my business contacts at AT&T and my government contacts at the park. At the same time, I was eager for more business acumen. I wondered how the city pitched the project as something that would be beneficial to AT&T. I wanted to understand these synergies.”

Julie learned that her counterpart at AT&T had worked in government before earning an MBA. “She pushed me to consider an MBA because it had opened so many doors for her and gave her a new perspective.” Julie then conducted several informational interviews with NYU Stern MBA alumni. “I found like-minded people who raved about Stern,” she remembers. Although I expanded my search to consider other schools, it felt like Stern was speaking my language. It felt like a great way to tie together my interests in government, business and New York City, and I even submitted a video essay on Washington Square Park. I was so excited when I was accepted.”

In addition to her full course load and an active role in the Government and Business Association at Stern, Julie dedicated herself to a private-sector internship and job search: “I was looking for the right company where I could bring communications and strategy skills to the table, along with my partnership work. I wanted to work in a large company that was prominent in its field with great leadership and a collaborative environment. American Express is the company I focused on first and it remained my top choice. I completed my summer internship there and was offered a full-time position as Client Manager in their Global Network Partnership group. It plays to my strengths and interests in creating and strengthening partnerships, this time in the private sector. I’m so excited to take on my new role after graduation.”
Share / Print