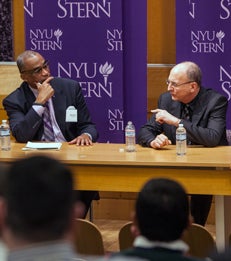 If the public doesn’t want to come, you can’t stop them.

The TRIUM Global EMBA Class of 2015 was given a real-world lesson in “intrapreneurship” as well as a rare behind-the-scenes look at The Metropolitan Opera by General Manager Peter Gelb, who has led the company since 2006. In his eighth season, he is the 16th general manager of the Met. Introduced by TRIUM Academic Director Sonia Marciano, Gelb spoke to the class about his initial position at the Met Opera as a teenage usher, mediating disputes among some colorful and passionate fans, then to his invitation to interview for the general manager post by the legendary soprano Beverly Sills, to his ultimate selection in August 2006 to lead the opera.

Gelb has strived to keep a balance of innovation and risk-taking without losing the base of supporters and fans. Since his appointment, he has introduced theatrical innovation in the repertoire, added modern operas to the schedule, directed the globalization of the Met’s franchise and expanded audiences through the introduction of HD broadcasts in theatres around the world, open rehearsals, festivals and live broadcasts from Times Square. As the former head of record label Sony Classical, Gelb earlier managed the career of pianist Vladimir Horowitz, experience that serves him well as he works with the “vocal gladiators,” who appear on the Met’s stage during its nine-month season. The season’s schedule gives a sense of the scope and complexity of his management position – four operas in repertory; seven performances a week; and 220 a season.

Prof. Steven S. Rogers, himself an entrepreneur as well as an academic, interviewed Gelb to draw lessons from his experience for the international student audience, many of whom had recently seen the Met’s sold-out production of “Falstaff.” Gelb quoted a former mentor, Broadway producer Sol Hurok, who said, “If the public doesn’t want to come, you can’t stop them.” With that in mind, Gelb, who thinks of his role as “a producing gig,” spoke of having to think both artistically and financially, with creative decisions necessarily informed by business considerations. One case in point: Wagner’s Ring Cycle, which he asked director Robert Le Page to envision as the Lord of the Rings trilogy as written by Wagner.

Having explored the creative side of his role, Gelb turned to the financial. He explained that before the 1940s or 1950, opera was a profitable enterprise that could rely only on ticket sales for its funding, and consequently, unlike art museums, did not build a large endowment early in its history. The Met, which has the largest budget of any non-profit – $320 million – raises revenue through its box office, the HD broadcasts, its modest endowment and donations from corporations, foundations and individual donors who are passionate about the art form.

Gelb’s initiatives to bring the Met Opera’s to a global audience were validated by the global TRIUM cohort in the Q&A session in which questions about the management and funding of the arts prompted a lively interchange about the preservation and creative development of this art form.
Share / Print