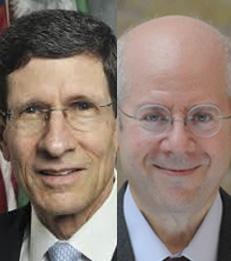 The need to monitor the resilience of the financial system has risen with its complexity and interconnectedness. Financial stress tests have become one of the most important monitoring tools. In a recent study, NYU Stern Executive-in-Residence and Adjunct Professor Richard Berner and Professor Kim Schoenholtz analyze the use of financial stress tests from a network perspective. Focusing on central counterparties (CCPs), they introduce a high-frequency metric as a complementary tool for assessing a CCP’s potential impact on the resilience of the financial system.

With appropriate safeguards, central clearing in CCPs can reduce counterparty risk, facilitate uniform margining standards, and improve trade reporting, making risk concentrations transparent, among other benefits. However, because they are highly interconnected, CCPs have the potential to transmit shocks throughout the system, so they must be resilient and rigorously manage their risk.

In “Stress Testing Networks: The Case of Central Counterparties,” Professors Berner and Schoenholtz, together with co-author Stephen Cecchetti of Brandeis International Business School, recommend supplementing stress tests of a CCP and its clearing members with a new high-frequency indicator that is based on a weighted sum of the NYU Stern Volatility Lab’s SRISK — the market-based conditional capital shortfall — of the CCP’s clearing members.

To show how the central counterparty hubs can transmit and amplify shocks across borders, the authors applied their customized, high-frequency metric to two large CCPs, the Chicago Mercantile Exchange and the London Clearing House. They draw two conclusions: the two hubs would likely come under stress simultaneously, as they share many of the same clearing members, and the U.S.-based Chicago exchange has substantial exposure to European banks. “As a result,” they write, “an important source of fragility in these well-defined networks emanates from the relatively low capitalization (relative to the likely losses following a significant global shock) of European banks.”

The authors note that this SRISK-based measure can serve as an early warning indicator, helping to focus the attention both of market participants and supervisors on evolving sources of fragility. In a financial system where exposures change rapidly, the infrequency of supervisory stress tests—which typically occur no more than once a year—makes such high-frequency monitoring tools key for preserving resilience. As such, they believe their results add to the regulatory toolkit: “We view network-based, customized stress tests as a promising means to assess the vulnerability of the global financial system to shocks originating in key network nodes that lack short-run substitutes.”