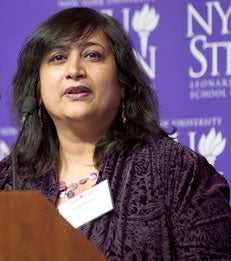 These results ... indicate that the perception of independence is a key factor in enabling consumers to view their behavior as meaningful expressions of their identity.

Achieving a fit between a brand and a consumer is a sure sign of success among marketers. But according to new research by NYU Stern Professor of Marketing and Dean of the Undergraduate College Geeta Menon together with her co-authors Tuck’s Amit Bhattacharjee and Wharton’s Jonah Berger, explicitly defining that fit can backfire.

In “When Identity Marketing Backfires: Consumer Agency in Identity Expression,” Menon and her co-authors describe the five studies they designed to tease out the line between when consumers identify positively with a product’s attributes and when they resist being pigeonholed by the marketer.

One of the key insights of this research is that there are nuances to the practice of identity marketing that need to be carefully considered. The line between invoking identity as a positive attribute for a product and shouting it is a thin one, because consumers need to feel that their identity is defined by themselves.

Says Menon: “These results, based on the dissertation work of my former student, Amit Bhattacharjee, indicate that the perception of independence is a key factor in enabling consumers to view their behavior as meaningful expressions of their identity” – critical advice for managers who use identity marketing as a club rather than a suggestion.
Share / Print
Back to Top