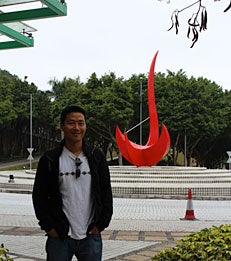 Hong Kong is full of great places to wine and dine with cuisines available from all around the world.

Hong Kong is full of great places to wine and dine with cuisines available from all around the world. But I personally have enjoyed the local food the most. For example, the seafood by the many markets ocean towns around Hong Kong is amazingly fresh. Below, you can see a floating market of fresh catches of the day in Sai Kung.

Sai Kung is also where the famous Honeymoon desserts started, and I hada chance to try out one of my favorite desserts – mango pudding there. It was definitely the best I’ve ever had.

Later on, I visited Nan Lian Garden, a very famous Garden that is built in the classical style of the Tang Dynasty (618 AD to 907 AD). According to the park, it is built “on the blue print of Jiangshouju, the only Tang landscape garden the original layout of which can still be placed and traced today, and the shape of which bears a significant resemblance to the Garden site. Hills and rocks, waters, plants and timber structures are built and arranged according to classical Tang style and rules, accommodating the local environment.”

In mid March, a couple of fellow Sternies came to visit Hong Kong, and I had a chance to catch up with them over dim sum, which I’ve seemed to have had a lot of since I’ve been here.

The location where I live in called Jordan, in Kowloon. It’s a very festive area that hosts one of the largest night markets in Hong Kong on Temple Street. Below is a picture of the market before it gets super crowded.

My area is also famous for the jade market, where jade retailers line the street and a massive jade market is situated behind my apartment.

As the weather has been very cloudy, I haven’t been able to do much outdoors. But as soon as the weather turns nicer, I will post more about the amazing scenery that Hong Kong has to offer.
Share / Print