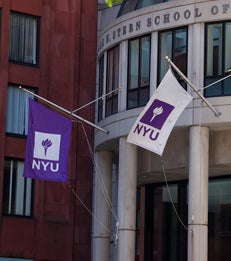 From left to right: Andrew Lo, Robert Merton, Raghu Sundaram
Annual Reviews, MIT Golub Center for Finance and Policy (GCFP) and New York University Stern School of Business (NYU Stern) convened for a two-day conference, “2008 Financial Crisis: A Ten-Year Review,” spotlighting the perspectives of those with expert vantage points of the crisis. New review articles focused on the 2008 financial crisis in the Annual Review of Financial Economics Volume 10 were presented. The conference program covered topics including bailouts and their consequences, accounting issues that impact financial stability, trust and the future of finance, asset pricing, leverage and systemic risk.

“In many ways, [the financial crisis] has spawned new research and new critical thinking that has been fabulously valuable in many ways, and I'm very proud to say that NYU and Stern in particular, led by Matt [Richardson] and others at the Salomon Center, have been leaders in this area,” said Dean Raghu Sundaram in his opening remarks, highlighting the Stern faculty’s collective five books on the crisis as well as research and engagement with policymakers connected to the crisis.

Highlights from the conference include a session titled “Financial Regulation: Past, Present and Future,” chaired by Professor Yacine Ait-Sahalia of Princeton University, in which Professors Stephen Ryan and Kim Schoenholtz presented their research, along with Professors Franklin Allen of Imperial College and Gary Gorton of Yale University. In his presentation on accounting issues and financial stability, Professor Ryan advocated for loan-level disclosure requirements for banks, rather accounting regulatory changes. Professor Schoenholtz discussed the implications of the Dodd-Frank Act, arguing that size alone is not an effective identifier of potentially risky institutions.

Professor Lawrence White chaired a session on “New Perspectives on Housing and Financial Crises,” which featured research presentations on housing markets and mortgage defaults by Christopher Foote of the Federal Reserve Bank Boston and Antoinette Schoar, Professor at MIT Sloan. In her research presentation on housing markets, Professor Schoar showed that defaults by middle and high income mortgage borrowers contributed significantly to the crisis.

Professor Thomas Philippon chaired a session on “Theory and Measures of Financial Crises,” which featured research presentations by Professor Robert Engle with insights on systemic risk, as well as Arvind Krishnamurthy of Stanford University, Tobias Adrian of the International Monetary Fund and Andrew Metrick of Yale University.

In a presentation titled “Reflections on the Financial Crisis,” Professor Myron Scholes of Stanford University shared how option prices can be used to measure risk.

Timothy Geithner, Former Secretary of the United States Treasury, participated in a fireside chat with Andrew Lo, professor at MIT Sloan and co-editor of the Annual Review of Financial Economics, sharing his perspective on the crisis.

Three former central bankers, Ben Bernanke, Former Chairman of the United States Federal Reserve; Mervyn King, former Governor of the Bank of England; and Jean-Claude Trichet, former President of the European Central Bank, took part in a panel discussion on “The Role of Central Banking in Crisis Management,” moderated by Stanley Fischer, former Vice Chairman of the Federal Reserve Board. Bernanke stated that the Federal Reserve did not anticipate runs in collateralized markets or fully realize the vulnerability in the modern financial system before the crisis, but highlighted research presented by Professor Andrew Metrick and Professor Robert Engle as indicators that the progress has been made to reduce systemic risk. Lord King emphasized the role of undercapitalization and low confidence in the banking industry in the crisis. Trichet underscored the role of financial contagion, facilitated by banks’ interconnectedness, and the impact of the crisis in Europe and Asia.

“It’s only by bringing together all of the relevant stakeholders that we think we can move forward with the hope that better models, better methods, better data is going to allow us to come up with better policy,” said Professor Lo in his closing remarks.
​​​​​​
Watch clips from the conference and see a selection of social media posts below:

Honored to be part of this remarkable conference about the 2008 Finance Crisis 10 years later, sponsored by @AnnualReviews, @MITgcfp and @CFAinstitute. Speakers include @AnnualReviews authors as well as regulators who were "in the room where it happened"! https://t.co/3yzq9Dcf9z https://t.co/D1xtnnsx0P

.@Prof_RobEngle, of @NYU_Volatility, talks about systemic (s-) risk. He defines it as the amount of capital a financial institution needs to function normally in a crisis. #FinancialCrisisReview

The former central bankers were most struck by the speed of contagion amongst banks during the crisis. Interconnectedness made that possible. #FinancialCrisisReview

“For me, the first lesson was that the banking system was undercapitalized.” - former Governor of the Bank of England & #NYUStern Prof Mervyn King #FinancialCrisisReview pic.twitter.com/5CzYUcREbL

Highlight: @bcheungz reporting from NYU on what former Fed Chair Ben Bernanke is saying about the tools the Fed has in a future downturn: https://t.co/ObzMOMFjVy pic.twitter.com/55J50w9I9u


To view a photo gallery from the event, please click here.