Panel I – What are Creditor’s Rights?

“Here at NYU Stern, we’re staying at the forefront of the dialog about the financial crisis, the needed regulatory reforms and the way the financial crisis has been approached from a policy perspective,” said Dean Thomas Cooley, panel moderator. “Today’s topics of debate – bankruptcy and creditor’s rights – have been front-and-center over the past several months, following the bailouts of Chrysler and GM.”

“Sadly, I have to say that after Chrysler, nothing is unprecedented.”

Calling the Chrysler deal “a reorganization in the guise of a sale,” Adler argued that the government’s actions were inconsistent with bankruptcy laws. He also blamed Judge Gonzalez, who approved the auto maker’s sale, for eliminating confidence in securitized lending when it was sorely needed to help rejuvenate the economy. 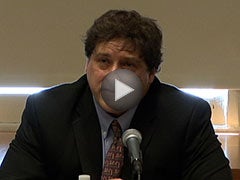 “I don’t think that Chrysler will survive. I think it will go out of business, and you’ll see Fiat cars in the US in five years.”

Looking at the unprecedented role of government bailing out the auto industry, Altman said that the bankruptcy code is being re-written. He stressed the concept of “absolute priority,” which dictates that senior creditors must be paid in full when a firm files for bankruptcy before any other level of creditor is paid. According to Altman, 37 percent of bankruptcies result in a violation of absolute priority.

“I think that Chrysler and GM won’t have much impact on future bankruptcies.”

Looking at market reactions to the two auto giants’ bankruptcies, Rosenfeld said that nothing has changed in the distressed trading markets. He also recognized that there are times when Chapter 11 filings and section 363 of federal bankruptcy code do not work together.

“With too-big-to-fail, capitalism is compromised and equity of opportunity is sacrificed to expediency.”

Rejecting the notion that some firms are too-big-to-fail and criticizing the government’s ad hoc approach, Hoenig laid out a three-step plan to address troubled, large institutions:
Read President Hoenig's speech.


Panel II – What if a Large Bank is Failing?

“If you get a large economic shock in the US or abroad, or some geopolitical event, then it’s pretty likely you’re going to see one of these large banks in trouble again, because the risk is so great on their balance sheets,” commented Stern Professor Matthew Richardson, who moderated the second panel.

“The most crucial criteria for deciding if you want to go through forbearance, or a bailout, is deciphering whether the institution is illiquid or insolvent.”

Building on President Hoenig’s remarks, Roubini offered a similar approach based on distinguishing between insolvent and illiquid institutions. He stressed that receivership is the best approach to adopt with insolvent firms, because it minimizes taxpayer losses, reduces moral hazards, offers clear guidelines and protocol, and provides a faster means to divest from the institution.

“Part of the reason we’ve had these ad hoc responses [from the government] is because there is no guidebook for what to do next.”

Krimminger identified some key elements of a resolution process for struggling financial institutions: continuity, consistency and predictability on what will happen to creditors; and a willingness to impose losses on shareholders and other creditor classes.

“One of the most important things that I think we should try to avoid is having government managing firms or banks on governance issues.”

Several issues arise in forbearance, said Scholes. Voicing his primary concern, he projected that risk taking among non-failed entities will increase after the government bails out too-big-to-fail institutions.

“Firms are scrambling like never before to try to avoid bankruptcy.”

Looking at startling statistics about the uptick in distressed exchanges in the last 18 months, Altman determined that firms are doing everything they can to avoid bankruptcy because the associated risks are greater and the chances for surviving are lower than ever before. He argued that a massive amount of deleveraging is required to “get out of this mess.”

“Imagine a world where regulators determine whether banks are insolvent, and when they are getting close [to insolvency, those banks are required] to raise capital.”

Ackman described a model in which banks that are insolvent go into receivership. In his model, the hierarchy of claims is respected, management is replaced, the board of directors is ousted and the entity reemerges as a public company within 30 days. He also proposed that the government guarantee depositors, CDS counterparties and bank loan commitments during the short-term receivership to eliminate systemic risks.


View the event in its entirety: