Board Monitoring of Risk Management at Center of NYU Directors’ Institute 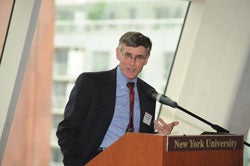 The NYU Pollack Center for Law & Business, a joint initiative between NYU Stern School of Business and NYU School of Law, in May hosted its seventh annual Directors’ Institute, entitled, “Board Monitoring of Risk Management.” Created to help directors stay current on their legal, fiduciary, and ethical responsibilities, the Directors’ Institute was attended by more than 50 experts and practitioners in the fields of law, business, and regulation.

William R. Berkley, chairman and CEO of insurance company W. R. Berkley Corp., opened the Directors’ Institute with remarks about board risks from an insurer’s perspective. He said that the current economic crisis has brought a new level of volatility and in his 40 years of risk insurance experience, he’s never fully realized the risk of correlation, even though all investments have it, until now. He said the important, ominous questions to ask are: How and when should risk be measured? How can a company stay ahead of risk and change its exposure to risk? And how can a company know if it is being too risky? He argued that mathematical theory is not enough – that managers need common sense, expertise, and critical eyes. He advised that boards set aside time to discuss internal and external risks in order to provide oversight while allowing chief risk officers to do their jobs. He suggested the following guidelines for firms: make managers risk conscious, have boards define companies’ risk tolerance, determine how to measure risk, and have board members set parameters for keeping them informed.

Following Berkley’s comments, Joseph S. Tracy, executive vice president and director of research at the Federal Reserve Bank of New York, shared his outlook on the US economy. He predicted that the current economic downturn is likely to be the longest and deepest since the 1930s. He said production and employment continued to decline rapidly through March as the economy worked through an unusually large inventory correction, though inflation continues to slow. While nominal income growth is declining, real income growth is increasing, boosted by drops in energy prices and taxes. He noted that the personal savings rate is up but that a lot of savings are being spent on debt reduction. He described the dramatic declines in net worth, and the excess inventory in the housing market. All in all, he argued that fiscal and monetary policy is working.

The luncheon keynote address was delivered by Richard Ketchum, chairman and CEO of the new “FINRA” – Financial Industry Regulatory Authority, who spoke about the financial reform legislation in the US and abroad. He argued that the present financial turmoil creates opportunities for fixing the plumbing of the architecture of the markets. He said there is a need for more thoughtful regulation, not regulation for regulation’s sake, and that financial regulators need to cooperate more effectively with one another, now more than ever. He suggested that regulators address the lack of transparency with over-the-counter derivatives, beef up surveillance of the equity market, create legislation that establishes a clear set of principles, develop one oversight body of investment advisors and broker/dealers, and resolve turf issues between regulatory agencies.

The conference also featured panels that examined the board’s role in monitoring risk management, what every director should know about asset-backed securities and credit default swaps, risk embedded in succession planning and CEO compensation, and legal compliance risks in a crisis. It included expert panelists from the US Securities and Exchange Commission, the Delaware Court of Chancery, and NYU Pollack Center for Law and Business, among others.

Learn more about the NYU Pollack Center for Law & Business.