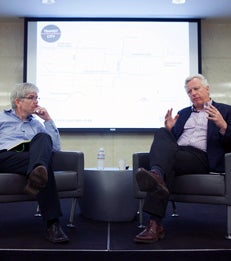 As a part of the Conversations on Urbanization series held by NYU Stern’s Urbanization Project, former Toronto Mayor David Miller spoke with Paul Romer, Director of the Urbanization Project and Professor of Economics, in a public presentation on March 7. During the conversation, they discussed how Miller had developed Toronto and built out the city’s public transportation system during his time as mayor, and the urban planning lessons he had learned in the process.

The two speakers discussed the value of Toronto’s rectangular street grid, a result of the original land surveys conducted a few centuries ago. Although surveyors could not foresee the impact at the time, the grid allows for easier implementation of public transportation and therefore greater population density today. “What do we do today when planning for future infrastructure?” Miller asked. He stressed the need for planners to consider climate change, as well as the difficulty in changing street patterns and transportation systems once they have been established. “My advice,” he said, “is, A) Get your grid right, and quickly, even in areas of informal settlement, and B) You’ve got to get transportation and public infrastructure there from the beginning.” Additionally, he noted the challenge of protecting green space as land is rapidly sold to developers and taken over by squatters, and advised, “build the public space first.”