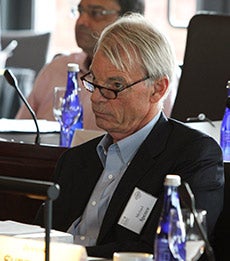 Economists and policy makers from the G20 countries gathered at NYU for a two-day, deep-dive on employment this September.

Jobs have been at the center of the policy debate around the world.

Economists and policy makers from the G20 countries gathered at NYU for a two-day, deep-dive on employment this September.

Hosted by NYU Stern and the Indian Council for Research on International Economic Relations (ICRIER), and with support from the World Bank and the Department for International Development, the workshop entitled, “Employment – Global and Country Perspectives,” explored a number of trends and issues including:
Nobel Laureate Professor Michael Spence (left) chaired the workshop.

Participants reflected on this year’s workshop:

"Unemployment is the most significant cause of distress in poor countries,” said Dr. Duvvuri Subbarao, governor of the Reserve Bank of India. “Both in the short-term and in the medium-term, jobs have been at the center of the policy debate around the world. The symposium stimulated a critical conversation amongst policy makers and academics from emerging and advanced economies – both having much to learn from each other."

“We recognize trade, we recognize globalization of finance, but we don't recognize globalization of labor so much,” explained Nobel Laureate Professor Michael Spence. “Since the 90's, China (since 80's) and India joined the world labor markets and that contributed enormously to raising productivity levels across the world. But it has also presented new distributional challenges, ones that are different from the past. These now need to be addressed in a wide range of countries, advanced and developing."

“India is the second-fastest growing economy in the world, after China, but this rapid growth hasn't had the sort of expected effect on employment,” explained Ajit Ghose of the Institute for Human Development. “We still have traditional, low-productivity employment overwhelmingly dominant in the economy.”

Parthasarathi Shome of ICRIER warned that, “Converting university degrees to employable youth is a major challenge.”

"This meeting correctly singled out the goal that all governments should be striving to achieve – Every adult should have a chance to work in a formal sector job,” said Professor Paul Romer.
Share / Print