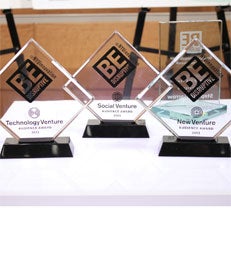 In the end, each team emerged with a new business concept that imagines a powerful market disruption and a plan to transform it into reality. - Luke Williams

NYU’s most promising innovators received a combined $200,000 in startup cash at the annual $200K Entrepreneurs Challenge held by NYU Stern’s Berkley Center for Entrepreneurship & Innovation. The four winning teams composed of students, alumni and faculty from seven different schools across campus, were chosen after pitching their ideas and enduring grueling Q&A by judges from venture capital, technology and design, and social enterprise sectors.

May 3 marked the culmination of one of the largest and most rigorous accelerator programs in the world. More than 178 teams comprising over 500 entrants from 14 schools at NYU competed this year in one of three contests: New Venture; Social Venture, for those pursuing both social impact and financial sustainability; and Technology Venture, showcasing teams focused on bringing intellectual property developed at NYU to market. The awards presented in each category were:

New Venture Competition Winner
The $75,000 Rennert Prize, made possible by a gift from Stern Board of Overseers member Ira Leon Rennert (MBA '56), was awarded to Smart Vision Labs. Co-founders Marc Albanese (MBA '08) and Yaopeng Zhou (MBA '14) developed a portable vision examination device, the Smart Aberrometer. The pocket-sized, low-cost device uses the flashlight and camera of a smartphone, combined with an add-on micro-lens array to measure refractive errors of the eye and generate prescriptions. 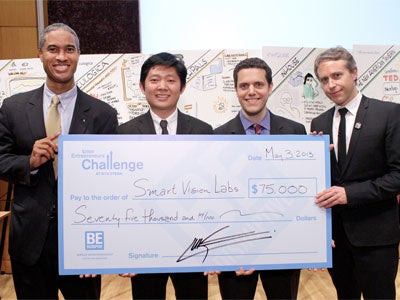 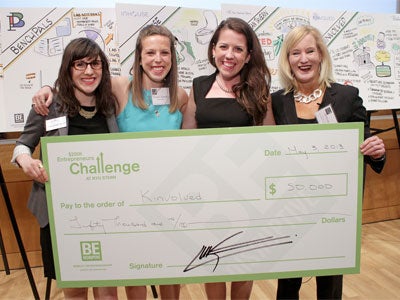 Technology Venture Competition Winners
Two teams split the $75,000 Technology Venture Prize. Oculogica was awarded $50,000 to continue work on a diagnostic device that detects and quantitates the extent of concussion, structural brain injury and other diseases affecting brain function. Unlike imaging studies, which reveal what the brain looks like, their technology captures how well it functions. Stephan Ogilvie (MBA '04), Robert Ritlop (MBA '14) and Uzma Samadani, MD, PhD, FACS, FACS of the NYU School of Medicine Faculty, believe the technology will help evaluating treatments for concussion as well as determining when brain injured people can return to work or play. 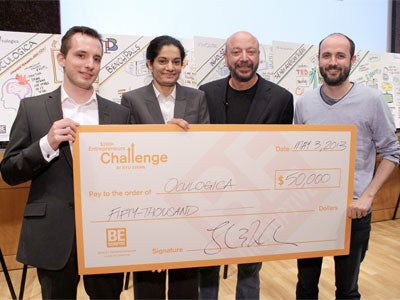 Also receiving a nod from the judges, and $25,000, was Databetes, a web and mobile-based software delivering users with data-driven, clinical and educational services. Developed by Doug Kanter and Ryan Viglizzo, students in the Interactive Telecommunications Program (ITP) at NYU’s Tisch School of the Arts, and D’Arcy Saum, Databetes explores new ways to use data to improve health outcomes for people with diabetes. 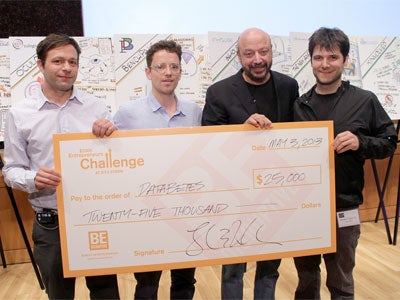 More on this year's Entrepreneurs Challenge
“Over the past eight months, our 12 finalists were provoked, prodded and praised by our coaches, mentors and evaluators,” explained Luke Williams, executive director of NYU Stern’s Berkley Entrepreneurship Center for Innovation. “In the end, each team emerged with a new business concept that imagines a powerful market disruption and a plan to transform it into reality.”

“Great inventions have a long path from idea to commercialization,” said Frank Rimalovski, managing director of the NYU Innovation Venture Fund and executive director of the NYU Entrepreneurial Institute. “The Entrepreneurs Challenge dramatically accelerates the process of getting potentially life-saving innovation out of the lab and into the marketplace.”

Audience Choice Awards
The audience also had a chance to vote for their favorite teams, selecting BioInspired Devices, which developed a urinary catheter aimed at preventing infections; Kinvolved; and weeSpring, a social shopping platform for new and expecting parents, as this year's Audience Choice Award recipients.

Mentor-of-the-Year
In recognition of the critical role volunteers play in mentoring, coaching, and judging the teams throughout the competition, Stephen Garrow (MBA '89) received this year’s Mentor of the Year Award presented by the Berkley Center’s Cynthia Franklin and Loretta Poole.