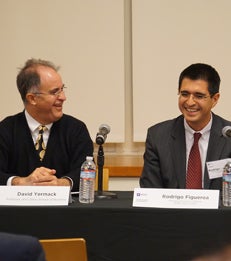 One of the most widely known digital currencies, Bitcoin, has gained market attention with its recent price movements. The growth of Bitcoin and digital currencies has also raised many questions in the financial and regulatory spaces. Current students and alumni from the MSRM program asked several questions of the panelists, addressing whether Bitcoin is recognized as a currency or a store of value, or a combination of both, and how that will impact regulation.

Another topic of interest at the Roundtable was cybercrime and security within digital currencies. Even though Bitcoin is pseudo anonymous, the recent development of blockchain can track each transaction allowing for more controls over the uses of Bitcoin. Specifically, the “closed network” can help address the validation questions raised by many large institutions while still utilizing the benefits of blockchain. In its current form, Bitcoin will continue to raise similar questions as adaptation continues to grow in the global economy.