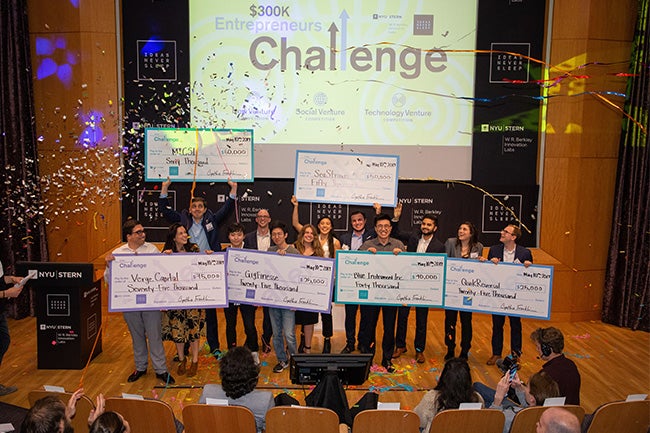 At the conclusion of an eight-month competition, NYU’s most promising innovators received cash prizes and pro-bono startup services valued at more than $300,000 at NYU Stern’s annual Entrepreneurs Challenge, organized by the School’s W. R. Berkley Innovation Labs. The six winning teams were chosen after pitching their ideas and enduring Q&A by judges from a variety of sectors, including insurance, social enterprise, sustainability, venture capital, philanthropy and software.

May 10 marked the culmination of one of the largest and most rigorous venture competitions in the world. Some 243 teams comprising more than 500 students, faculty and alumni from 19 schools across NYU’s global network competed this year in one of three competition tracks: New Venture, Social Venture and Technology Venture. The awards presented in each category were:

Winners of the New Venture Competition: for startups in a variety of sectors
The $100,000 Rennert Prize, made possible by a gift from Stern Board of Overseers member Ira Leon Rennert (MBA ’56), was split between GigFinesse ($25,000) and Verge.Capital ($75,000).

Founded by CAS undergraduate student Mir Hwang and Jong Wook Kim, GigFinesse is an online platform that connects artists and their fans to venues and their patrons, simplifies the booking process and protects both parties from experiencing a financial loss or a poorly planned event.

Founded by Stern alumnus Yiannis Giokas (MS ‘16) and Ioanna Stanegloudi, Verge.Capital will be a pan-European credit score provider that enables consumers and financial institutions to universally assess affordability and creditworthiness of individuals by utilizing machine learning on top of open banking APIs.

Winners of the Social Venture Competition: for social impact and sustainability ventures
The $75,000 Social Venture Prize was split between QuikReversal ($25,000) and SeaStraws ($50,000).

Winners of the Technology Venture Competition: to bring intellectual property developed at NYU to market
The $100,000 Technology Venture Prize, sponsored by the NYU Innovation Venture Fund, was split between Blue Instrument ($40,000) and MICSI (Microstructure Imaging, INC) ($60,000).

“As we look ahead, we’re excited by the prospect of further strengthening the entrepreneurial ecosystem at NYU by fostering greater collaboration and even more interdisciplinary team building,” noted Deepak Hegde, academic director of the W. R. Berkley Innovation Labs.

“For the past 20 years, the $300K Entrepreneurs Challenge has provided a springboard for launching exciting new ventures,” said Cynthia Franklin, director of the W. R. Berkley Innovation Labs. “Challenge teams have gone on to be acquired by companies such as Amazon, Twitter and AirBnB. They have developed life-saving technology and life-changing innovations. We’re proud of our long tradition of developing the entrepreneurial skill sets and mindsets of students and alumni from all across campus,” added Franklin.

“Most of the teams that enter have no previous startup experience at all. For this reason, we provide extensive training, coaching and advising around the tools, frameworks and methodologies that entrepreneurs can use to increase their chances for success,” explained Phoebe Punzalan, associate director of the W. R. Berkley Innovation Labs.

The finalist teams showcased their ventures through brief pitches and explainer videos before an audience of NYU students, faculty and alumni, as well as members of the broader NYC startup community, who voted for their favorite teams. This year, GigFinesse, MICSI (Microstructure Imaging, INC) and QuikReversal received the Audience Choice Awards, presented by Punzalan.

In recognition of the critical role volunteers play in coaching and judging the teams throughout the competition, Shanif Dhanani (MBA ’12) and Jane Lauterback received this year’s Mentor of the Year Award, presented by Franklin.