NYU Stern Announces the Establishment of the First Creative Destruction Lab in the U.S. 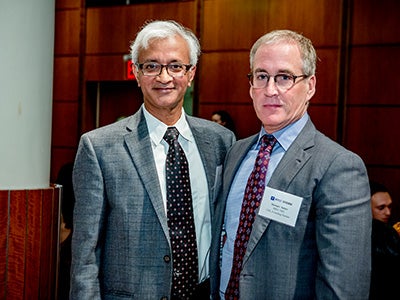 NYU Stern celebrated the launch of CDL-New York City, the first Creative Destruction Lab in the U.S., with an event on October 10. Raghu Sundaram (left), Vice Dean for MBA Programs and Online Learning, kicked off the event. Stewart Satter (MBA ’82) (right), a Partner at City Light Capital, the former President and CEO of Consumer Testing Laboratories, and a former Stern Board Member, has given a $1 million gift toward the establishment of CDL-New York City.

Today, New York University Stern School of Business announced that it will enter a partnership with the University of Toronto’s Rotman School of Management to establish the first Creative Destruction Lab – CDL-New York City – in the United States.  The program is laser focused on maximizing value for science and technology startups through the unique CDL model that integrates the venturing process with the MBA curriculum.  CDL Toronto, where the model has pioneered, has generated more than $1 billion of equity value creation in the five years since its founding.

CDL-New York City will bring together, in a nine-month program, three groups: highly successful serial entrepreneurs and angel investors; founders of pre-seed stage startups in science and technology; and Stern faculty and MBA students.  Startups selected for the program will benefit from opportunities to raise capital and receive guidance from the Lab’s Chief Scientists – world-renowned NYU faculty drawn from science and technology disciplines, including researchers who’ve successfully commercialized their own companies.  They will also receive business development support from Stern faculty and MBA students through an affiliated experiential-based CDL course.

“By establishing the first Creative Destruction Lab in the country here in downtown New York City at NYU Stern, we are signalling our commitment to deepening our existing infrastructure in entrepreneurship education,” said Raghu Sundaram, Vice Dean for MBA Programs and Online Learning.  “Building on NYU’s history of innovation, we look to be a hub that matches inspired ideas with the expertise to scale and commercialize them – and develop MBA students in the process who may want to follow a similar entrepreneurial path in the future.”

CDL-New York City will begin accepting applications from early-stage science and technology-based startups on January 1, 2018 and expects to admit about 25 ventures in the first year.  Applicants can be graduates from universities other than NYU. The program will begin in September 2018.

About the CDL-New York City program
The startups chosen for CDL-New York City will move through the nine-month program by meeting a series of objectives and producing deliverables at eight-week intervals.  A seven-member panel of experienced entrepreneurs and investors, called the G7, will provide mentoring during five full-day meetings scheduled at these designated touch points.  At the meetings, the startup founders will present their progress and be evaluated by the G7. Ventures that fail to achieve milestones will be asked to drop out of the program at various stages.  Those that reach their objectives and graduate from the program will be eligible to attract investment from the G7, as well as other leading venture-capital firms.  During the program, startups can also benefit from access to several complementary services for entrepreneurs, including the prototyping facility at NYU’s Leslie eLab and the $300K Entrepreneurs Challenge at Stern’s W.R. Berkley Innovation Labs.

The faculty director of CDL-New York City, Professor Deepak Hegde, an expert in entrepreneurship, innovation and intellectual property rights, will run the program and also teach the CDL course. MBA students who enroll will provide startups with business consulting while gaining firsthand experience in the business fundamentals essential for developing entrepreneurial strategies.

Ajay Agrawal, Peter Munk Professor of Entrepreneurship at the Rotman School of Management at the University of Toronto, founded the CDL model.  His CDL model has launched several highly successful startups in areas ranging from the life sciences, artificial intelligence, machine learning and more.

About New York University Stern School of Business
New York University Stern School of Business, located in the heart of Greenwich Village, is one of the nation’s premier management education schools and research centers. NYU Stern, whose faculty includes three Nobel Laureates in Economics, offers a broad portfolio of programs at the graduate and undergraduate levels, all of them enriched by the dynamism, energy and deep resources of one of the world’s business capitals. Visit www.stern.nyu.edu and follow NYU Stern on Twitter: @NYUStern. 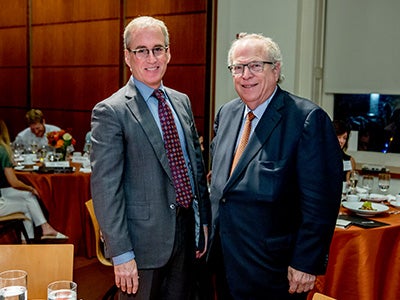 Stewart Satter (MBA ’82) (left), a Partner at City Light Capital, the former President and CEO of Consumer Testing Laboratories, and a former Stern Board Member, has given a $1 million gift toward the establishment of CDL-New York City. William R. Berkley (BS ’66) (right), chair of NYU’s Board of Trustees and chair emeritus of Stern’s Board of Overseers, hosted and convened the initial group that generated momentum for CDL-New York City. Both were in attendance at the CDL-New York City launch event. 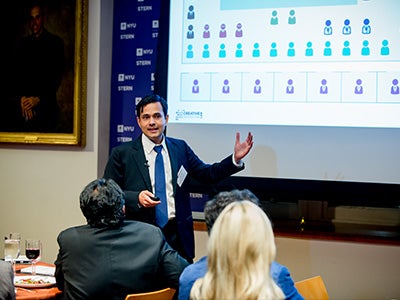 Professor Deepak Hegde, who will serve as faculty director of CDL-New York City, at the launch event explaining how the initiative will integrate the venturing process into the School. 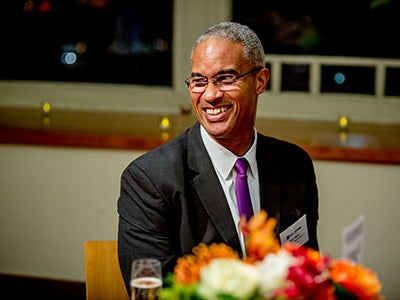 Dean Peter Henry at the event celebrating the launch of CDL-New York City. 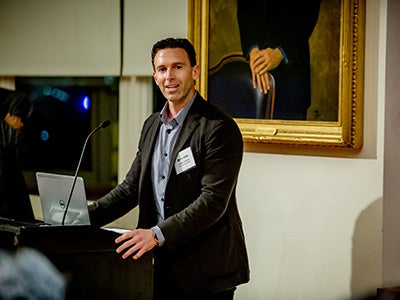 Anthony Lacavera, founder and chairman, Globalive Capital, presenting at the CDL-New York City launch event. Lacavera will serve as the first G7 member of CDL-New York City and has pledged his support as a Founding Member. 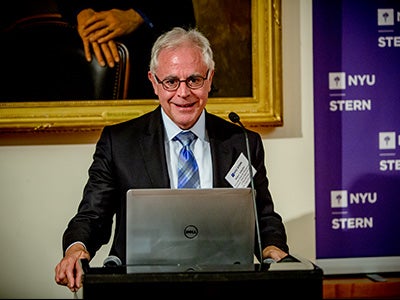 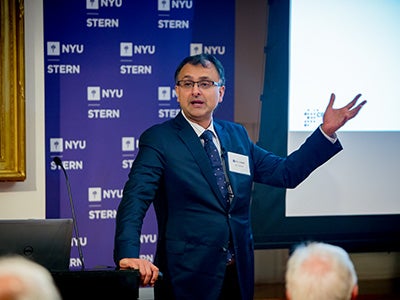 Ajay Agrawal, Peter Munk Professor of Entrepreneurship at the University of Toronto’s Rotman School of Management, at the CDL-New York City launch event detailing how he founded the CDL model.