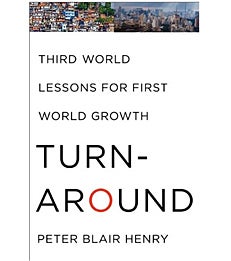 The stakes are higher than ever and "Turnaround: Third World Lessons for First World Growth" reveals the three things we need for a more prosperous future: Discipline, Clarity, and Trust.

"A riveting tour of postwar world growth, replete with policy successes and devastating mistakes, Turnaround is essential reading for anyone willing to be convinced that learning should be a two-way street between advanced and developing economies."
—Michael Spence, Nobel Laureate in Economics (2001)
TURNAROUND: Third World Lessons for First World Growth

Thirty years ago China seemed hopelessly mired in poverty, Mexico had triggered the Third World Debt Crisis, and Brazil suffered under hyperinflation. But in recent decades, these and other developing countries have turned themselves around, while First World nations, battered by economic and fiscal crises, struggle to stay afloat. With the global economy teetering on the brink, America’s prosperity now depends on our ability to learn from these prior foreign struggles—and successes—with economic reform.

The stakes are higher than ever and Turnaround: Third World Lessons for First World Growth reveals the three things we need for a more prosperous future:
Turnaround rejects tired, ideologically driven debates. Instead, Henry uses objective stock market analysis as an important complement to traditional measures of policy effectiveness. In doing so, he provides answers to the fundamental question: which policy reforms, implemented under what circumstances, actually increase economic efficiency and help countries make the most of their scarce resources?

Turnaround delivers stories that demonstrate—from the drastic income disparity between Barbados and Henry’s native Jamaica, to the “catch up” economics of China and the taming of inflation in Latin America—how, in much of the emerging world, the policy pendulum now swings in the direction of prudence and self-control. With similar discipline, the First World may yet recover and create long-term prosperity for all its citizens.

Peter Blair Henry is the Dean of New York University’s Stern School of Business and a former Professor of International Economics at Stanford University. In 2008, he led Barack Obama’s Presidential Transition Team in its review of international lending agencies such as the IMF and World Bank. A member of the board of the National Bureau of Economic Research, the Council on Foreign Relations, and the Kraft Foods Group, Peter received his PhD in economics from MIT and Bachelor’s degrees from Oxford University, where he was a Rhodes Scholar, and the University of North Carolina, where he was a Morehead Scholar and a finalist in the 1991 campus-wide slam dunk competition. Born in Jamaica, Peter became a US citizen in 1986. He lives in New York City with his wife of 17 years and their four sons.

“A timely, provocative, and instructive book for policymakers, CEOs, and ordinary citizens alike. It’s a new world, and Peter Henry shares the lessons with us all.”
—Tom Brokaw, NBC News Special Correspondent, and author of The Times of Our Lives

“Peter Henry had the original thought that the experiences of ‘emerging economies’ may contain lessons for advanced economies. He shows that they do, but not in any crude cookie-cutter way. The vital common thread is the capacity to form a future-oriented policy and stick to it with discipline. This is why we—all of us—need grown-ups.”
—Robert M. Solow, Nobel Laureate in Economics (1987)

“A compelling analysis of the trends that are transforming emerging markets and a practical assessment of what it all means for the global economy.”
—Kenneth I. Chenault, Chairman and CEO, American Express Company

“Tempering the ‘dismal science’ with a healthy dose of optimism, Turnaround exposes sobering realities of the world economy, yet paints a hopeful picture of prosperity for the countries of Africa and, indeed, all nations.”
—Her Excellency Ellen Johnson Sirleaf, President of Liberia and Nobel Peace Laureate (2011)

“A child of the Third World risen to First World academic prominence, Peter Henry effectively bridges both worlds, offering a vision of what leaders can achieve if they take the long road, implementing sensible economic policies with accountability, integrity, and persistence.”
—Ngozi Okonjo-Iweala, Minister of Finance of Nigeria

“Turnaround is not only highly readable, it ought to be read by specialists and by policymakers who will inevitably have to deal with the issues Henry so expertly analyzes.”
—Stanley Fischer, Governor of the Bank of Israel