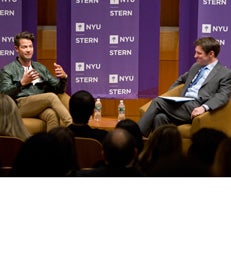 A home should tell the story of who we are.

“A home should tell the story of who we are,” remarked Berkus. He went on to share his story, one of an established interior designer who has a passion for transforming homes and lives around the world. He credits his determined nature and love for decoration as what fueled his desire to enter the industry.

Berkus’ career took off when he was 24 years old. He attributes much of his early success to The Oprah Winfrey Show, where he was a regularly featured guest. “Oprah changed the way I looked at business,” he said when describing how he structures his own companies. Berkus also acknowledged the importance of  the people with whom he surrounds himself. When hiring new talent, he looks for employees who are driven, genuine and share his long-term vision.

Throughout the interview, Berkus offered valuable advice to students and alumni as they pursue their own career paths: ___
This Langone Speaker Series event was co-hosted by Stern's MBA Office of Student Engagement & W. R. Berkley Innovation Lab.