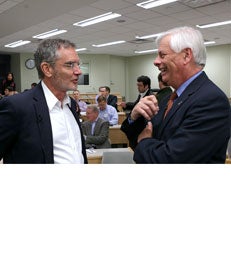 My brain is always thinking about what’s next. --Bob Pittman

In a packed room of MBA students, Mr. Pittman shared his story, one of a chief executive who has a passion for solving problems, building brands and giving customers the convenience they desire with every business he influences. Mr. Pittman led an illustrious career as the CEO of MTV Networks, AOL Networks, Six Flags Theme Parks, Quantum Media, Century 21 Real Estate and Time Warner Enterprises.

Now, in his role at the helm of Clear Channel, he speaks of radio as a “reliable partner ” whose resiliency in an ever-evolving digital world renders it a staple that has, and will continue, to play a meaningful role in people’s lives.

Mr. Pittman concluded the interview with some relevant advice for the aspiring leaders in the audience: Watch the video: