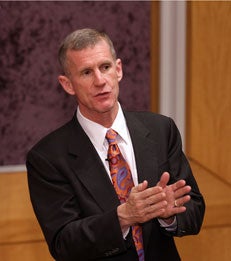 Success in competitive environments – whether in business or the military – takes a shared consciousness and purpose.

“What does it take to win?” asked retired US Army General Stanley McChrystal, former commander of the International Security Assistance Force and US Forces in Afghanistan, on Friday evening in NYU Stern’s Paulson Auditorium. Hosted by the TRIUM Global Executive MBA Program, an alliance among NYU Stern, the London School of Economics and Political Science, and HEC School of Management in Paris, General McChrystal spoke candidly about lessons in leadership to more than 200 students and alumni.

General McChrystal emphasized the need for trust, teamwork and timing in addition to talent, technology and tactics to succeed in today’s complex and changing world. “Winning also takes something else,” he continued. “Success in competitive environments – whether in business or the military – takes a shared consciousness and purpose.” When faced with a problem and a landscape that is unknown, he stressed the importance of transparency and inclusiveness. Sharing informed perspectives across the organization builds a sense of common ownership and responsibility for a clearly understood mission, he explained. “In other words, everyone, regardless of rank, owns the problem.”

Bringing his leadership lessons to life, General McChrystal shared stories of both success and failure, including several examples from the conflicts in Iraq and Afghanistan. He described how the US military was forced to adapt when faced with a new kind of enemy after 9/11 – one that was culturally difficult to understand, geographically dispersed, dynamic and morphing. According to General McChrystal, flying faster, shooting straighter and working harder wasn’t the whole answer. Instead, he argued, the armed forces needed to shift their culture from one of “excellence” to one of “winning.”

Concluding his talk, General McChrystal said that inspiring a greater level of commitment is the mark of a great leader. “It’s not enough to be great; you have to be great together.” 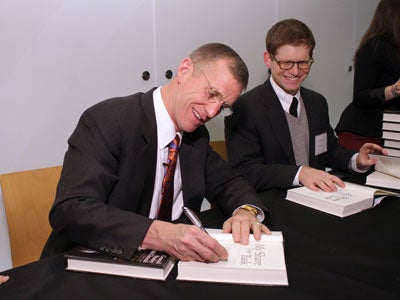 General Stanley McChrystal signed copies of his new book, My Share of the Task: A Memoir.

Watch a video recording of the discussion