— March 8, 2011
As part of NYU Stern’s CEO Series, Charles E. “Ed” Haldeman, Jr., CEO of Freddie Mac, the second largest source of mortgage financing in the United States, offered his perspective on the future of the US housing market, its role in the broader economy and the leadership principles he has applied throughout his career, before an audience of close to 100 NYU Stern students, faculty and alumni. The interview was conducted by Nick Timiraos of The Wall Street Journal.

Haldeman projected low real estate prices in 2011, a weak recovery in 2012 and continued slow growth in the following years. He also described a recent white paper from the Department of the Treasury and the US Department of Housing and Urban Development, which set forth a plan for reforming the American housing finance market.

In light of the fragile real estate sector, Fannie Mae and Freddie Mac should remain operational for 5-7 years, according to the plan. The white paper also outlined a range of possible futures for government-sponsored enterprises (GSEs), calling for an increase in private capital in the mortgage market and a decrease in the percentage of mortgages that are tied to government backing. 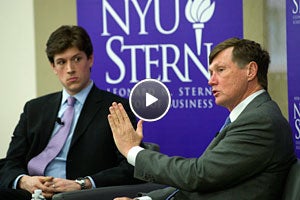 Watch the video of the interview.

Citing recent headlines of Freddie Mac and sister entity Fannie Mae being wound down, Haldeman expressed how challenging it is to run a company and keep employees engaged when the future is uncertain. He described several practices that he employs to keep Freddie Mac’s 6,000+ employees motivated:


“This is a great opportunity for employees to learn how politics work and how public opinion is shaped,” explained Haldeman. Above all else, he stressed that it was in the country’s best interest to keep “the machine” working. This spirit of public service is partly why he took the job – a position that many friends and colleagues told him he was “crazy” to take.

Haldeman recalled the tumultuous circumstances when he came on board – Freddie Mac just finished a year in which its stock holdings and 401K were wiped out and the organization was operating without a Chief Financial Officer or Chief Operations Officer.


Haldeman also underlined the importance of relating to people and working well in teams – a key characteristic that he looks for in new hires.

The NYU Stern CEO Series presents some of the world's most successful and innovative business leaders in candid conversations with renowned business journalists, editors and television personalities.

If you're a member of the press, please contact Stern’s Office of Public Affairs at: