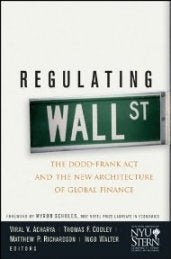 In response to the Dodd-Frank Act, the most significant U.S. financial regulation since the 1930s, the faculty returns with a strong call-to-action to regulators. More than 40 NYU Stern finance, economics and accounting professors stress key flaws in the bill, and how these failures could set the next global financial crisis in motion.

"In our book we provide a detailed description of each part of the Dodd-Frank Act, an economic appraisal of its strengths and weaknesses, and a careful examination of key omissions that we think regulators need to urgently consider, since failure to do so could lead to the next crisis," said Matthew Richardson, Charles E. Simon Professor of Applied Financial Economics at NYU Stern, and one of the book's editors. "It is extremely critical to carefully examine each of the flaws in this highly uncertain climate where new capital allocation structures continue to develop in the shadow banking system."

As 11 different regulatory agencies now begin the process of adopting the Act's 243 new formal rules, the faculty offer key proposals to integrate into this critical legislative step whose outcomes, due by December 2011, will shape the future of global financial architecture for years to come. The following provides an outline of some of the major criticisms of the Act and the Stern authors' corresponding recommendations:

Flaw #2: The Act does not sufficiently discourage individual firms from putting the system at risk.

Flaw #3: The Act falls into the familiar trap of regulating by form rather than function.

Flaw #4: Regulatory arbitrage is not adequately addressed, so large parts of the shadow banking sector remain in their current form.

Regulating Wall Street is currently available from Wiley and on Amazon.com.

New York University Stern School of Business is one of the nation's premier management and education research institutions, engaged in leading the dialogue between business and society. NYU Stern offers a broad portfolio of academic programs at the graduate and undergraduate levels, all of them informed and enriched by the dynamism, energy and deep resources of New York City.