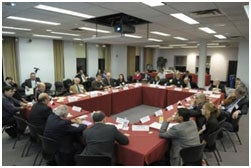 “No one complained when mark-to-market accounting principles meant marking up,” commented NYU Stern Accounting Professor Seymour Jones, who led a discussion about political influence on accounting standard-setting this November at NYU Stern. In light of the increased scrutiny on accounting practices as a result of the financial crisis, he asked, “To what extent should government control Generally Accepted Accounting Principles (GAAP)?”

Some 50 academics, practitioners and policy makers gathered for a roundtable discussion, hosted by Stern’s Vincent C. Ross Institute of Accounting, to debate whether or not the Financial Accounting Standards Board (FASB) should be insulated from political pressure.

Raymond Beier of PricewaterhouseCoopers LLP argued that standard setting needs to be independent and free from government influence.

NYU School of Law Professor Stanley Siegel posed the idea of creating a principled process in which politicians openly share their objectives, when pushing for changes to accounting standards.

Karthik Ramanna of Harvard Business School discussed his joint research entitled, “Are Republicans Conservative,” which studied auditor comments about accounting standards over the course of several years. He found that as the number of Democrats serving on the FASB decreased, the number of favorable views on standards expressed by the “Big Eight” accounting firms increased.

Pointing to the failure of conventional regulation, Robert Herz, chairman of the FASB, argued that incentives for business leaders to employ a “delay and pray” tactic in their financial reporting were significant culprits in the financial crisis and need to be addressed.

Taking an opposing view, Stern Economics Professor Lawrence White underlined the value of a “delay and pray” option for companies during an economic downturn, saying that when it works, it saves companies and investors from unnecessary pain.