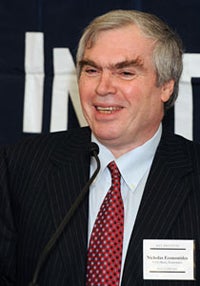 Distinguished academics from around the world convened to share their research in the rapidly evolving field of network economics at the Eighth Networks, Electronic Commerce and Telecommunications (NET) Institute conference, held in partnership with NYU Stern’s Entertainment, Media and Technology Program.

As a global focal point of research in network industries such as the Internet, telecommunications, electronic trade and social networks, among others, the NET Institute has awarded approximately $200K in grants per year for the past eight years to support promising young researchers at Stern and other leading institutions around the world who are advancing the field.

NYU Stern Professor of Management & Organizations Robert Seamans shared his research on how online classifieds have affected traditional media, entitled, “Technology Shocks in Multi-Sided Markets: The Impact of Craigslist on Local Newspapers.” Professor Seamans and co-author Feng Zhu of the University of Southern California examined classified advertising rates, subscription pricing, circulation and display advertising rates at local newspapers both before and after Craiglist was launched in their respective regions (e.g., Boston, Chicago, San Francisco). Results indicated that when digital competition from Craigslist enters a market, local newspapers in the region with classified editors experience a decrease in classified advertising rates, an increase in subscription prices, a decrease in circulation and a decrease in display advertising rates.