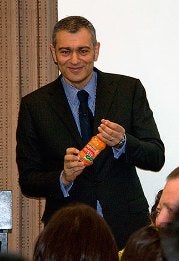 Based in Zagreb, Atlantic Grupa is a leading Croatian company and regional giant in consumer goods (food and health care), "the standard-bearer for economic reintegration in the fragmented lands of the former Yugoslavia," according to the Financial Times. Mr. Tedeschi described Atlantic Grupa’s history, from its humble beginnings distributing Wrigley’s chewing gum during the 1990s war in the former Yugoslavia, to its nearly $1 billion in sales today. He spoke about entrepreneurship, leadership, the company’s IPO, marketing, entering new markets, the challenges of streamlining the company’s culture across the many countries where they operate, and the process of integrating the businesses of Droga Kolinska, a company that Atlantic acquired in 2010. He also offered his thoughts on how the company could structure a serious entry into the U.S. market, though he also indicated that this was probably still several years away.

One hundred and thirty EMBA students were in attendance at this lunch event, with others joining by standing in the room, to hear the presentation and participate in the Q&A concluding Mr. Tedeschi’s remarks. A group of EMBA alumni returned to Stern to join the lunch, having been so impressed with their first meeting with Mr. Tedeschi on their "Global Study Tour" course in Croatia in 2009. Atlantic Grupa is the leading European producer of sports food with the well-known Multipower brand, the largest regional producer of food supplements with Dietpharm brand, a prominent producer of personal care products as well as the leading distributor of consumer goods in South-Eastern Europe. The Atlantic Grupa distributed several of their products at the event, including Multipower bars and Cedevita "almost-ready-to-drink" sports beverages.
Share / Print
Back to Top