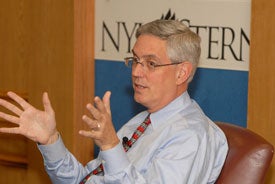 According to Mr. Conant, a successful food company needs to have a great brand, be in large, expandable categories, have a good financial profile and have the ability to execute on its business strategy. When Mr. Conant joined Campbell Soup in 2001, Campbell Soup had all of the above, except for the ability to execute on its business strategy. Although its financial profile had recovered after four troubled years, the culture at Campbell had suffered, and many of its best employees had left, not willing to wait out the hard times. Mr. Conant was thankful that some of its top employees who were loyal to the Company stayed on. To assemble the best management team to execute on his transformation strategy, Mr. Conant promoted employees who were performing at higher levels and hired outsiders who were excited to be part of the transformation.

So how did Mr. Conant change the culture at Campbell? His approach was to prove he was a leader who cared not only about the company, but also about its employees. He was explicit about his expectations for employee performance and standards, but "tender" with people. Repeated employee surveys helped him measure progress and track the positive change in employee morale and company culture.

Today, Campbell is succeeding in its food category and is on its way to achieving its mission: to achieve world-class employee engagement and to deliver the best total return to its shareholders over the next decade, relative to its peer companies.