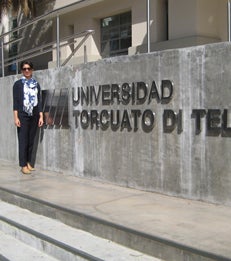 “When I was exploring executive MBA programs, I was really drawn to the fact that Stern offers not just one but two Global Study Tours during the two-year program,” says Amrita Sandhu, a student in NYU Stern’s Executive MBA program who works for an international financial services company. “I manage a global team,” she notes, “and it’s important for me to understand different regions. Knowing the economy, culture and outlook in other regions makes me more effective at my job.”

In September, Amrita and her classmates explored Argentina and Brazil during a Global Study Tour to South America. “This was completely different from being tourists,” she says. “This program actually allows you to see how business works in different parts of the world, and how different parts of the global economy interact.” The class became familiar with the challenges and opportunities that exist in the region as they visited sites such as an Argentinian manufacturing plant and the Rio Operations Center, listened to presentations by numerous business leaders and saw an overview of Brazil’s preparation for the 2016 Olympics. ”The various presentations and visits came together to give us a view of the many aspects that make up an economy. It was well-rounded and current. Everything pieced together and themes began to emerge,” she recalls. “Focusing so much content and information into such a short timeframe is no small feat, and to come away feeling so educated is commendable.”

Amrita was intrigued to learn that “Brazil’s dependency for growth is now on China, not the U.S. or Europe. The leaders we heard from were much more concerned about the slowdown in China than in the U.S. or Europe, which is a huge change from the last decade. This is indicative of the power of the BRICs and how they are far more interconnected than we realize.”

Another valuable aspect of the tour, for Amrita, was gaining a comprehensive understanding of how business is conducted in South American countries: “In the United States, you get right down to business, but in South America it doesn’t work that way. You need to build a relationship, which takes time. There is less legal recourse than we are used to in the U.S. so trust is very important. Having a strong relationship can be even more important than your product.” Moving forward, she will be mindful of the cultural importance of small talk, which is often discounted in the U.S. She notes, “You can be very good at your job, but if you don’t have that cultural nuance, you won’t be as effective.”
Share / Print
Check out Amrita's Global Study Tour Photo Slideshow