If you have any questions, please email Megan Hallissy (mhalliss@stern.nyu.edu).

In the connected economy, value is created through the technology-enabled links between people, machines and organizations. With the increased amount of data coming from connected devices, companies need to take large amounts of real-time data, analyze it quickly and provide results, responses or recommendations immediately. A digitally connected economy opens up new opportunities for growth, but competing in a connected economy requires a new way of thinking to fully tap its potential.

For this Symposium we will explore how analytics has evolved with the connected economy and is the driving factor, creating an economic resource that companies are using to generate new sources of value and growth.

According to Gartner Research there will be 20.8 billion devices on the Internet of things by 2020.  IoT is driving the value generated in the connected economy. In this panel we will explore the applications of analytics in IoT from several different perspectives.

With the explosion of connected devices and the massive amounts of data they produce, businesses, individuals and government bodies need to evaluate their current strategy and future plans to handle, process and make sense of this growing amounts of data. This session explores the implications and challenges that this ecosystem of connect devices has on businesses. Professor Provost's research focuses on the issues involved with aligning data mining technologies with real-world problems. Currently he is focusing on mining social-network data, such as networks of consumers, where the connections can be important for predictive modeling. He also is focusing on economic considerations in data mining and machine learning; technical strategies may change when cost and benefit information is taken into account. Professor Provost has applied data mining technologies to a variety of business problems, including on-line advertising, fraud detection, network diagnosis, targeted marketing, counterterrorism, and others.

Professor Provost has a B.S. from Duquesne University in Physics and Mathematics and an M.A. and Ph.D. in Computer Science from the University of Pittsburgh. Panos Ipeirotis is a Professor of Data Science and Information Systems and George A. Kellner Faculty Fellow at the Department of Information, Operations, and Management Sciences at Leonard N. Stern School of Business of New York University. His recent research interests focus on crowdsourcing and on mining user-generated content on the Internet. He received his Ph.D. degree in Computer Science from Columbia University in 2004.

He has received nine best paper awards and nominations. He is also a recipient of a CAREER award from the National Science Foundation and of several other grants. He has been profiled twice at BusinessWeek, first as innovator in crowdsourcing, then as the "data dude" in a business school (when dealing with data was not deemed to be cool). In his spare time, he fights financial crime at Detectica. Prior to GSTV, as head of US media research at Twitter, Eric led a multi-disciplinary research, analytics, and data science team charged with demonstrating and quantifying the value of Twitter to media companies, content owners, and multi-platform marketers.

Eric lives in New York City with his wife and daughter. Diptimaya Mishra, MSBA '15, is a Big Data Solutions Architect  at Microsoft Corporation where he helps in solving  complex  business problems and data challenges faced by Microsoft's enterprise customers. His areas of expertise lie in Machine Learning, Big Data Analytics and Internet of Things (IoT). He is also the Principal Data Scientist for the real estate startup Brixsy.

Prior to Microsoft, Diptimaya was leading a multi-disciplinary IoT and advanced analytics team at Penske. During his tenure at Penske, Diptimaya led the Connected Vehicles initiative that leveraged real time streaming data from the vehicles to derive insights and perform predictive maintenance.

Before joining Penske, he was part of various Business Intelligence and Analytics teams at AIG and 21st Century Insurance. Joah serves as adjunct professor for Columbia University’s School of International and Public Affairs.  He serves at guest lecturer for Georgetown University’s McDonough School of Business.  He is an industry affiliate of Cornell University’s Program in Infrastructure Policy and a member of the Advisory Board of University at Buffalo’s Institute for Sustainable Transportation and Logistics.

He received a BS from Cornell University and a MPA from Columbia University.
The Symposium will be held at NYU Stern School of Business. 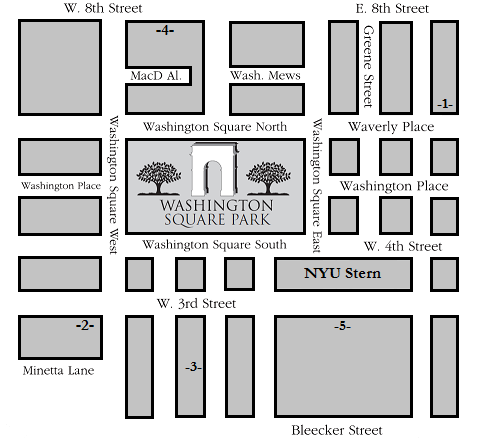 If you will need hotel accommodations near the NYU Stern vicinity, please visit our website for a list of options.