Time for the Feds to Get Moving on Infrastructure 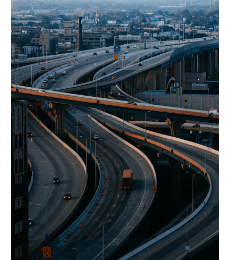 Clive Lipshitz and Ingo Walter
President-elect Biden and the 117th Congress must come together to craft a bipartisan infrastructure bill early in the new administration. It’s widely agreed that obsolescence in key parts of America’s infrastructure is holding us back in growth and economic competitiveness. While LaGuardia Airport is no longer the “third world” facility about which Biden complained in 2014, a trip from midtown Manhattan to the Bund in Shanghai via Newark Liberty or JFK Airports and Pudong at the other end make painfully clear that much work remains to be done. As Biden builds out his domestic policy team, we can expect a focus on renewal of America’s infrastructure. There’s more than enough capital to finance infrastructure, what’s needed are innovative financing solutions.

Hopes for big thinking on infrastructure were dashed during the Trump administration. Such ideas also were promoted during the Obama, George W. Bush and Clinton years. Not much happened. Why? Corrosive infrastructure deficiencies develop slowly, so it’s easy to kick the can down the road.

We forget that for more than two centuries, massive infrastructure projects gave rise to new frontiers and robust development of the American economy. Among them: the Erie Canal, the Transcontinental Railroad, the Panama Canal, the Tennessee Valley Authority and the Interstate Highway System. It is time to renew that visionary leadership.

Critical to the success of these historic projects was the harnessing of private, state, and federal government resources. The Covid-19 pandemic has placed tremendous stress on public resources and surfaced the need for resilience in critical infrastructure. This may be the tipping-point in Washington’s commitment to this key sector of the economy.

There is, however, a reality-check. It is state and local governments and special districts that own almost all public infrastructure in the United States. This sets limits to the role of the federal government in infrastructure finance. Moreover, federal financing of infrastructure tends toward a zero-sum game in competition between the states. There are exceptions: President-elect Biden has signaled support for the critical Gateway project in New York and New Jersey that was stonewalled during President Trump’s term in office – but then, “Amtrak Biden” regularly commuted by rail from Wilmington to Washington while the President took to the air.

The U.S. municipal bond market has been the primary source of financing for public infrastructure. But the scale of the infrastructure investment gap and the need for customized financing solutions suggest that a different approach is needed. There’s ample capital to finance infrastructure, even without politically-sensitive privatization of public projects. Unlocking that capital requires imaginative and innovative solutions.

For example, there is plenty of latent value in public infrastructure. One way to surface that value is “asset recycling.” This uses proceeds from the sale to private operators of concessions on existing public assets, and then plows the proceeds into new public projects. The federal government could incentivize the states to engage in asset recycling through a revolving fund that would allocate capital to new projects within participating states.

Governments own large pools of assets such as municipal buildings, whose value – not fully utilized – can be unleashed to finance new projects, especially at today’s ultra-low interest rates.

Another solution is “value-capture financing,” which extracts value from real estate developers and their commercial and residential clients who benefit from new infrastructure to help finance that very infrastructure.

Public-private partnerships (P3s) have been under-utilized in the U.S. as a tool for financing new infrastructure. One impediment is jurisdictional, since infrastructure often crosses state boundaries. There’s also the patchwork of procurement legislation and practices, differences in concession agreement terms, and the infrequency of new projects. Together, they make it very difficult to develop expertise in public-private partnerships at the state and local level.

What’s needed is a regional approach. The federal government can establish and fund regional P3 centers. These would be tasked with prioritizing projects in various parts of the country, standardizing concession terms, overseeing the engagement of private-sector partners, and monitoring adherence to concession terms.

Lastly, the public pension system – $4.4 trillion in assets – has been untapped as a source of capital for infrastructure. This is because most municipal debt is tax-exempt, making it unattractive to tax-exempt pension funds. Too bad, since pensions depend on taxpayer revenues as their primary source of funding, and modern public infrastructure is fundamental to a robust and stable tax base. Even better, the long-term nature of infrastructure assets and their relatively predictable, inflation-protected cash flows are a perfect match to the liabilities of pension funds. We need to find ways for pensions to invest in infrastructure.

Investing in distinct projects is beyond the capabilities of almost all public pension funds, nor is it prudent. The federal government could incentivize the creation of pension consortia – perhaps with private sector involvement – to facilitate investment by groups of public pension funds in portfolios of infrastructure projects. This would address two key public finance challenges simultaneously.

The incoming administration and Congress will face numerous challenges at what will hopefully be the tail-end of the Covid-19 pandemic. Now is the time to identify creative bipartisan solutions to ensure the long-term resilience of our critical public infrastructure.

___
Clive Lipshitz is managing partner at Tradewind Interstate Advisors and a guest scholar at New York University. Ingo Walter is a professor emeritus of finance at NYU Stern School of Business.
Share / Print ▼