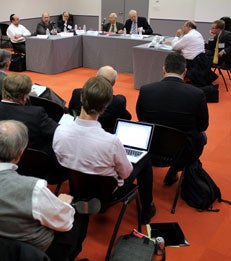 “You cannot serve two masters who have conflicting obligations. ... If the potential for abuse is there, then for all intents and purposes we have destroyed our opportunity for independence.”

Some 50 academics, practitioners and policymakers gathered at NYU Stern in November for a roundtable discussion on the re-emergence of consulting practices at the major audit firms. Industry experts discussed why the firms’ consulting revenues are increasing and whether the practice poses a conflict of interest.

Seymour Jones, clinical professor of accounting and associate director of the Ross Institute at NYU Stern, introduced the topic, asking, “In the last year, all four [major audit firms] had a degree of condemnation [from the Public Company Accounting Oversight Board (PCAOB)] because all had gone back into consulting again…how did they get so big given the prohibition [against most consulting services outside the scope of auditing] that was given in 2002?”

Stanley Siegel, professor at New York University School of Law, noted that audit firms have a fiduciary responsibility of trust and obligation to the shareholder but are paid and overseen by the corporation that they audit. “You cannot serve two masters who have conflicting obligations,” he stated, adding, “If the potential for abuse is there, then for all intents and purposes we have destroyed our opportunity for independence.”

Francine McKenna, CPA and freelance journalist for Forbes and American Banker, asked, “Are auditors the only market eunuchs in the capitalist system? They want us to believe they alone are immune from the power of financial incentives such as lucrative consulting engagements that overshadow the fees for their public duty as the auditor.”

Paul Volcker, former chairman of the Economic Recovery Advisory Board and former chairman of the Federal Reserve, relayed his experience from working with banks accused of wrongdoing: “When we found something wrong in the banks…not once did the in-house auditor or in-house legal firm find out who was responsible. … But when we used someone from outside, they were able to find out.”

Christopher Davies, partner at WilmerHale, urged some caution in drawing conclusions: “I don’t believe the sky is falling. I don’t think we have a crisis like we did in 2002.”

Robert Herz, executive-in-residence at Columbia Business School and member of PCAOB's Standing Advisory Group, discussed how the consulting services might affect auditor quality: “When you have non-audit services, how does that affect the competence of the people conducting the audit? … Will they still be treated as top priority, or do consultants eclipse them in importance?”
Share / Print