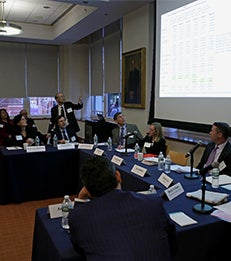 Investors shouldn’t be married to one metric but should instead try to reconcile the differences between the stories told through multiple measures. -- Jack Ciesielski

Experts from academia, financial industries, regulatory agencies, media and the legal and accounting professions gathered at NYU Stern on November 7 for a roundtable on “Recent Trends in Non-GAAP Reporting,” hosted by the Vincent C. Ross Institute of Accounting Research. The roundtable was dedicated to the memory of Professor Seymour Jones, a Stern alumnus (MBA ’54) and one of the founders of the Ross Roundtable series.

Non-GAAP (Generally Accepted Accounting Principles) reporting has been increasing in recent years, and more than 70 percent of S&P 500 firms now report non-GAAP earnings and other figures. Non-GAAP disclosures include such items as Earnings Before Interest, Taxes, Depreciation and Amortization (EBITDA), adjusted earnings, cash earnings and net debt. Roundtable participants presented arguments on a number of topics, including the necessity regulation, consistency and transparency globally, the beneficiaries of increased non-GAAP reporting and the measurable impact on the market. Opening the conversation, Professor Paul Zarowin, director of the Ross Institute and Roundtable moderator, addressed some of the key issues surrounding non-GAAP reporting, from prevalence to variations to market responses, and introduced the panel of discussants. Robert Herz, former chairman of the Financial Accounting Standards Board (FASB), offered pre-recorded comments on the resurgence of non-GAAP reporting in recent years, the history of projects by accounting standard setters to improve financial performance reporting and financial statement presentation, the potential value of such information if it is reported with some degree of shared standard and the ways technology is now changing the way we receive and interpret information. Jack Ciesielski, publisher of The Analyst’s Accounting Observer, described the current oversaturation of non-GAAP metrics, with different varieties appearing around the world, and called for investors to be more discriminating with the information available to them. “Investors shouldn’t be married to one metric,” he said, “ but should instead try to reconcile the differences between the stories told through multiple measures.” Martin Fridson, chief investment officer for Lehmann Livian Fridson Advisors, sounded the alarm more fervently, particularly on issues of stock performance and executive compensation, which can be camouflaged using non-GAAP measures. “This trend gives rise to concerns that these numbers can be manipulated,” he explained. Outlining current regulatory approaches to this growing trend, Kyle Moffatt, associate director of disclosures operations for the Division of Corporation Finance of the Securities Exchange Commission (SEC), reflected on the undue prominence of non-GAAP to GAAP measures and the need for better usefulness disclosures. However, he said the staff continues to work with registrants to better understand the basis for their measures and how such measures can be provided as a complement to the registrants’ GAAP measures. Francine McKenna, a reporter with MarketWatch, explained why the proliferation of non-GAAP measures obfuscates true performance and complicates the important role journalists and analysts play in the process. Journalists are increasingly calling attention to the lack of discipline in reporting and examples where metrics have been manipulated after earnings reports are published. “This is the next frontier of enforcement,” she said. Conversely, Professor Baruch Lev argued that companies are turning to voluntary non-GAAP disclosures more frequently because the usefulness of traditional reporting has been steadily decreasing. When presented well, non-GAAP metrics can offer a meaningful indicator of future developments in the business model that would otherwise be obscured by GAAP earnings alone. “In addition to non-GAAP earnings, companies voluntarily report a host of very important information, like the product pipeline of pharma companies or subscribers data of telecom and Internet companies. They do this to supplement the significant information loss of GAAP reports, and this non-GAAP disclosure is very useful to investors,” he concluded. Non-GAAP measures offer companies and investors the flexibility of choice, argued Beth Paul, a partner at PwC, by voluntarily including additional information and removing items that don’t provide predictive value. However, she noted, non-GAAP reporting is not audited and therefore presents inherent risk for investors who are negotiating the complexities of this information. Wrapping up the discussion, Adam Parker, chief US equity strategist at Morgan Stanley, illustrated the diminishing gap between GAAP and non-GAAP earnings by adjusting the model for one-time occurrences (though this can vary by sector) and argued that investors can earn higher returns by evaluating both GAAP and non-GAAP measures to better inform their decisions.