Regulating Wall Street: The Dodd-Frank Act and the New Architecture of Global Finance 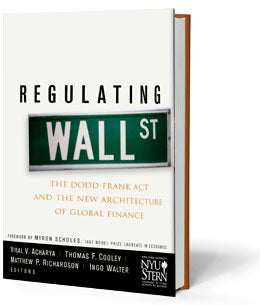 The Dodd-Frank Act, signed into law in July 2010, represented the most significant and controversial overhaul of the U.S. financial regulatory system since the Great Depression. Forty NYU Stern faculty, including editors Viral V. Acharya, Thomas F. Cooley, Matthew P. Richardson, and Ingo Walter, provide a definitive analysis of the Act, expose key flaws and propose solutions to inform the rules’ adoption by regulators, in a new book, Regulating Wall Street: The Dodd-Frank Act and the New Architecture of Global Finance (Wiley, November 2010).

Previously, many of these faculty developed 18 independent policy papers offering market-focused solutions to the financial crisis, which were published in a book, Restoring Financial Stability: How to Repair a Failed System (Wiley, March 2009).

"A fascinating, lively, and thoroughly readable guide to the Dodd-Frank Act that pierces the cloud of confusion that hangs over so much of the financial reform debate. It is extremely timely and valuable, and should be required reading for all policymakers, investors, and students of finance. What makes the book so valuable is that it not only analyzes the scope of the Act, in a punchy, lively style, but it also discusses its potential impact. More important, the book analyzes what is not covered in the Act--and where the potential challenges to the financial system still lie."
— Gillian Tett, U.S. Managing Editor, Financial Times

"The crisis of 2008 confronted even well-educated Americans with a flood of incomprehensible financial vocabulary, describing novel financial institutions and practices most of us had never heard of before. Now we have the 2,300-page Dodd-Frank Act, designed to provide the needed repair. Will it do so? What else will it do? How can we even start to think about these basic questions? Regulating Wall Street addresses these questions in a clear, direct style, taking us through the many parts of the Act one at a time, and providing informed, cogent economic analysis of each. A valuable standard source for future discussion."
— Robert E. Lucas, University of Chicago, 1995 Nobel Laureate

"Take the faculty of one of the best finance departments in the world. Ask them to analyze the new U.S. legislation on financial regulation, and to think about what the new law gets right, what it gets wrong, and how it is likely to shape the future of the financial system. With a bit of luck, you get this very impressive book. An absolute must-read."
— Olivier Blanchard, Chief Economist, International Monetary Fund

"Regulating Wall Street goes a long way toward clarifying the intent of the various provisions of the Dodd-Frank Act and evaluating both its effectiveness and limitations. The need for effective implementation by agencies is appropriately emphasized. Not a quick read, a useful reference work on an enormously complex piece of legislation, dealing with an even more complex financial reality."
— Paul Volcker, Chairman of the Economic Recovery Advisory Board and former Chairman of the Federal Reserve (1979-1987)

One year after the signing of the Dodd-Frank financial regulation reform legislation, regulators and market watchers say there are still a lot of hurdles to overcome to avoid another financial meltdown.
Watch Full Coverage

Reshaping the banks has only just begun

The US media has been buzzing with reviews and comments about William D Cohan's new 670-page blockbuster Money and Power, How Goldman Sachs Came to Rule the World, his third Wall Street "history" in just three years.
Read the Editorial

Preventing the Next Crisis

The FDIC says the Dodd-Frank Act would have allowed Lehman Brothers to wind down and sell its assets without government assistance. Would such legislation prevent another financial crisis from happening? Thomas Cooley, NYU Stern School of Business discusses.
Watch the Interview

Regulating Wall Street: The Dodd-Frank Act and the New Architecture of Global Finance, provides a detailed analysis of the Act by you and your economic colleagues. What is your overall assessment of the Bill?
Read the Interview

One refreshing sign of hope for constructive change is that economists, some of whose theories had much to do with a light regulatory approach toward derivatives and the housing bubble, are increasingly producing research calling for stricter guidelines than Dodd-Frank or the Obama administration. Regulating Wall Street presents a wide range of new research supporting stronger regulations than Dodd-Frank recommends, such as the tax proposals I mentioned earlier.
Read the Book Review 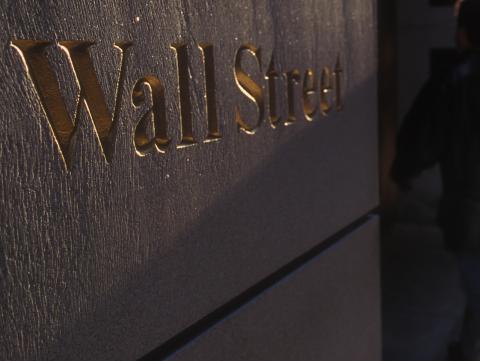