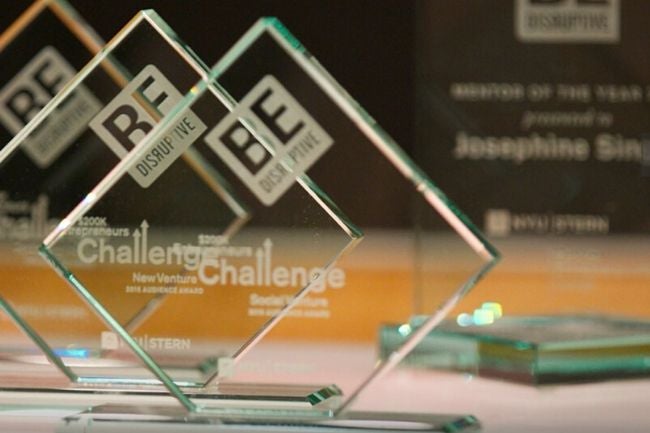 At the conclusion of an eight-month competition, NYU’s most promising innovators received startup funding and pro-bono services valued at more than $225,000 at NYU Stern’s annual Entrepreneurs Challenge, organized by the School’s Berkley Center for Entrepreneurship. The three winning teams were chosen after pitching their ideas and enduring Q&A by a panel of judges.

May 13 marked the culmination of one of the largest and most rigorous intra-collegiate venture competitions. Students, faculty and alumni from schools across NYU’s global network participated this year in one of three competition tracks: Technology Venture, Healthcare/Biomedical Venture, and New Venture. The Rennert Family Grand Prizes, made possible by the generous support of the Rennert Family Foundation, Ira Rennert (MBA ’56) and Ari Rennert (BS ’01), were presented in each category:

Technology Venture Competition:
The $75,000 Prize was awarded to Baton.

Founded by Gabe Warshaw (Tisch '23), Baton is a blockchain-enabled web platform and collaboration protocol designed for the future of creative digital exchange.

Healthcare/Biomedical Venture Competition:
The $75,000 Prize was awarded to Sipple.

New Venture Competition:
The $75,000 Prize was awarded to TrovBase.

The finalist teams showcased their ventures through brief pitches and explainer videos before a virtual audience of NYU students, faculty and alumni, as well as members of the broader NYC startup community, who voted for their favorite teams. This year, Celer, Sipple, and Techfunic received the Audience Choice Awards.