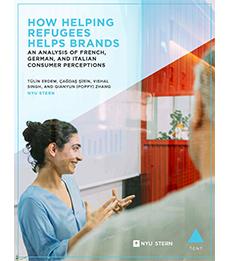 While the consumer demographics we studied demonstrate varied preferences for the type of commitments consumers prefer to see from brands, we observed that, overall, they tend to respond favorably to brands that support refugees.
Millennial consumers are most supportive of brands that help refugees, with 77 percent more likely to purchase from a brand that helps refugees. Even consumers on the right of the political spectrum are supportive of brands that hire refugees abroad.
New research unveiled on World Refugee Day 2019 reveals that, despite increasing polarization in Europe around the refugee crisis, consumers in Italy, France, and Germany are more likely to buy from brands that support refugees.

The report, entitled How Helping Refugees Helps Brands, was authored by professors at the New York University Stern School of Business and published by the Tent Partnership for Refugees. It surveys 12,200 consumers across the three countries.

It found that, while consumers in Europe are bitterly divided on the question of whether brands should advocate for more refugees to be admitted into Europe, they are overwhelmingly supportive of brands that seek to help refugees in other ways – for example, 44 percent of consumers are more likely to purchase from a brand that extends services to refugees, while only 14 percent are less likely to do so.

In particular, younger consumers aged 18 to 35 in all three countries are more favorable towards companies that help refugees: 77 percent are more likely to purchase from a brand that supports refugees in some way. The research suggests that the younger the consumers, the more positive their stance – indicating that brands stepping up their support towards refugees stand much to gain with the next wave of consumers. In addition, higher-income consumers and women tend to respond more positively to brands that support refugees.

Among the three countries surveyed Italian consumers are the most positive towards brands that help refugees. Support is higher in the south of the country, where more refugees tend to arrive.

“While supporting refugees can feel like a risky territory for brands, our research shows overwhelmingly that consumers in France, Germany and Italy reward brands that that take pragmatic steps to integrate refugees.” said Gideon Maltz, Executive Director of the Tent Partnership for Refugees. “What’s more, brands that take steps to support refugees abroad can attract support from across the political spectrum, including from right-leaning consumers who may be skeptical about refugees in general.”

Whilst the research found that political ideology is a strong indicator of whether a consumer will be supportive of a brand that helps refugees – with people on the left showing more support than those on the right – consumers on the right are surprisingly supportive of certain activities that support refugees. For instance, 39 percent of consumers who consider themselves to be on the right or slightly right of the political spectrum are more likely to purchase from brands that hire refugees abroad, and only 15 percent would be less likely to do so.

“While the consumer demographics we studied demonstrate varied preferences for the type of commitments consumers prefer to see from brands, we observed that, overall, they tend to respond favorably to brands that support refugees,” explained Professor Tülin Erdem, co-author of the report and chair of NYU Stern’s Marketing Department. “Younger demographics displayed the strongest favor for pro-refugee brands, demonstrating that brands can simultaneously do good for the world around them and do well by attracting a new generation of customers.”

The full report can be accessed online.

Methodology
The data for this research was collected through online surveys of consumers in France, Germany and Italy. 4063 people responded in Italy, 4069 responded in France, and 4085 responded in Germany. Consumers included in the survey represent all age groups from 18 to 75+, all income levels, all education levels and from all of the major regions in each country. Respondents were recruited through Research Now [now Dynata]. Consumers were asked a series of questions about five to ten categories including apparel, cosmetics, and grocery among others.

About the Tent Partnership for Refugees
The Tent Partnership for Refugees, founded by Chobani’s Hamdi Ulukaya, is mobilizing the business community to improve the lives and livelihoods of more than 25 million refugees forcibly displaced from their home countries. Tent believes that the business community is uniquely positioned to address the global refugee crisis by mobilizing the networks, resources, innovation, and the entrepreneurial spirit of the business community – and that companies have the greatest impact they leverage their core business operations to hire refugees, integrate them into supply chains, invest in refugees, and deliver services to them. The full list of over 130 Tent members can be found here. Learn more about Tent: http://www.tent.org.

About New York University Leonard N. Stern School of Business
New York University Stern School of Business, located in the heart of New York City, is one of the nation’s premier management education schools and research centers. NYU Stern, whose faculty includes four Nobel Laureates in Economics, offers a broad portfolio of programs at the graduate and undergraduate levels, all of them enriched by the dynamism, energy and deep resources of one of the world’s business capitals. Visit www.stern.nyu.edu and follow NYU Stern on Twitter: @NYUStern.
Share / Print ▼