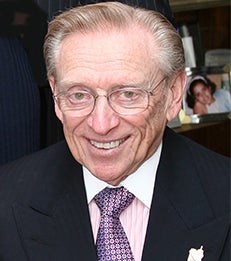 Introduced by Professor Bruce Buchanan, director of BSP, Silverstein spoke to a full-capacity audience at Paulson Auditorium in a talk entitled, “Rebuilding the World Trade Center and Downtown Manhattan.”

Silverstein, who has served on the NYU Board of Trustees since 1972, began the discussion by speaking about the difficulties faced by his team in their attempt to restore the commercial area in downtown Manhattan following the September 11 attacks. After five years of litigation over insurance policies, Silverstein secured the funding and rights to begin the construction of One World Trade Center in April 2006.

“Rebuilding the World Trade Center has been my life’s passion over the past 16 years,” said Silverstein. “I felt it deserved to be done and be done right.”

Silverstein led the audience through future plans for buildings Two, Four and Five, highlighting major architectural and technological advances that continue to reshape the world of physical design.

“New York City has the power to recreate itself,” he said. “Those strengths became immensely important throughout this project.”

Following his presentation, Silverstein fielded questions from the audience. For more information on the event, please visit the BSP website.
Share / Print