Google in Jeopardy: What If IBM’s Watson Dethroned the King of Search? 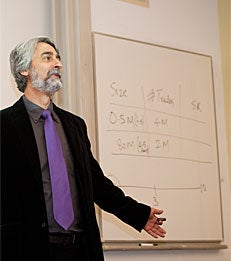 Google can retrieve, but Watson can create. There would be no reason for anyone to start their searches on Google.

Remember Watson, IBM’s Jeopardy champion? A couple years ago, Watson beat the top two human champions Ken Jennings and Brad Rutter at a game where even interpreting the cue is complex with language nuances. (Not to mention finding answers at lightning speed on any subject matter.)

Yet after the initial excitement, most people – except for a notable few – forgot about Watson. But we need to pay attention, and now. Because Watson heralds the emergence of “thinking machines” capable of knowledge creation that will trump today’s knowledge retrieval machines. This could be the beginning of a serious challenge to Google, whose most ambitious initiatives — from wearables to cars to aging — are funded through its thriving advertising business.

Watson was arguably the first computer ever to pass the Turing Test, designed by British mathematician Alan Turing to determine whether a computer could think. Turing argued that it was too hard to define “thinking,” but that a computer could be considered “intelligent” if a human interlocutor is unable to distinguish which of two entities being questioned is a machine and which is a human.

___
Vasant Dhar is Professor and Head of the Information Systems Group and Co-Director of Stern's Center for Business Analytics.