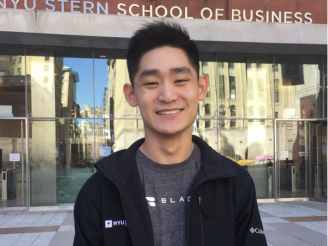 Most overhyped food or food spot?
Currently, I think DŌ is overhyped, but so are cronuts (even though I’m all about them).

How did you decide on your food studies minor?
Even though I originally wanted to minor in chemistry or joint minor in math and computer science, I ended up thinking: why would I do that if I’m already majoring in finance and accounting? I wanted to find something outside of Stern and something that I’m actually passionate about, and that ended up being food studies. It turns out there’s a lot more about food that I never knew before, and now I document all the food I eat on my foodstagram.

You recently competed at the 2017 fencing World Cup in Germany; what was that like?
The World Cup was the first international fencing competition I went to in four years. It was an amazing experience all-around, since world-class fencers and previous Olympic champions were all in the same venue that I was competing in. Even though the nerves got to me in the beginning, I was able to overcome them and ended up being happy with how I did. It was really just an honor to represent NYU and the US.

How has being a student athlete shaped your experience at NYU?
As with most sports, being part of a team taught me how to work together and make split-second decisions under time constraints. I’ve been able to apply these skills in school and work, and it’s made me glad that I decided to continue fencing in college. I’ve also been able to meet people I otherwise wouldn’t have hung out with, including some Olympians.

Other than fencing, are there any other experiences that have really shaped your time here?
Because I grew up in Manhattan and stayed in Manhattan to study, I never really left home until I studied abroad in Prague my sophomore fall. To live in a city that’s so slow-paced compared to New York was a culture shock, but I enjoyed it because it was relaxing and I was able to visit places I’ve never been to. I was also able to train with Czech fencers, and that gave me the opportunity to interact with locals and feel more integrated in the city.

What advice would you give to the incoming freshman class or underclassmen?
People expect NYU to change them, and NYU can change you, but you have to be open to that change. When I was a freshman, I didn’t get involved in clubs until second semester. Now as a RA, I’ve spoken to so many proactive freshmen, and that’s the right track to be on.
Posted in Humans of Stern
Share / Print ▼