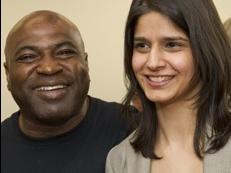 Seema Saifee, staff attorney for the Innocence Project, delivered the 11th annual Haitkin Lecture, hosted by NYU Stern’s Business & Society Program, to an audience of undergraduate Stern students. Saifee was joined by Andre Hatchett, who was recently exonerated after serving 25 years in prison for a crime he did not commit, and his brother, Jerry Hatchett.

Saifee discussed the Innocence Project’s mission to free the innocent using DNA evidence. She identified several key factors contributing to wrongful convictions: the lack of a process for policy reform in the criminal justice system, inaccurate eyewitness identifications, false confessions, ineffective counsel and jailhouse witnesses seeking leniency. “It is frightening how easy it is to convict an innocent person in this country,” especially if that person doesn’t have the financial resources to hire an effective attorney, she explained.

Working in partnership with the Conviction Integrity Unit in the Kings County District Attorney’s office, the Innocence Project took on Andre Hatchett’s case, which was one of 10,000 requests for assistance that the organization receives each year. Hatchett’s first defense attorney was deemed ineffective by the trial judge, and his second defense attorney, like his first, failed to present Hatchett’s medical records showing that, due to a leg and throat injury at the time, he was physically incapable of committing the crime.

Hatchett maintained his innocence throughout his time in prison. He was offered plea deals in exchange for serving as little as 4-8 years, but he refused to plead guilty to a crime he did not commit. His incarceration devastated his family; over the course of his incarceration, Hatchett lost his mother, brother, father and son.

Jerry Hatchett, Andre’s brother, who supported him throughout his incarceration, underscored the impact that the ordeal had on their family. “When you don’t have the means and the know-how to help somebody, it hurts,” he remarked. Though Jerry lacked the funds to hire a better attorney, he often played the lottery, hoping to win enough money to free his brother. “We don’t know lawyers. No one in our family had ever been in jail.” Jerry added that his young son is considering becoming a lawyer. “You have to get the right education so that what happened to your uncle won’t happen to you,” he advised.

About the Haitkin Lecture
The annual Haitkin Lecture is a forum dedicated to the examination of issues of integrity and ethics in business. It is a special opportunity that allows for Stern students to listen to and ask questions of extraordinary individuals from academia, practice and the press. The Haitkin Lecture was established through the generosity of Stern alumnus Jeffrey Haitkin (BS '68).
Share / Print