TIME Editor and Author Rana Foroohar Discusses her Book, “Makers and Takers: The Rise of Finance and the Fall of American Business" 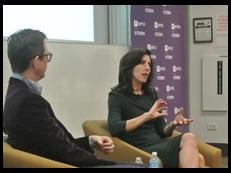 The root of the problem, Foroohar explains, is a dysfunctional political economy. As part of her research for Makers and Takers, she looked to policy discussions from the 1960s and 1970s, when government leaders were confronted with the problem of how to grow the economy. The result was the policies we have in place today, which incentivize debt and volatility. What we need, Foroohar explains is a rethink of the financial system and to incentivize investments that are socially productive.

A lively discussion with attendees from across industries followed, touching on shareholder value, labor, public companies, government regulation and homeownership.