Home / Programs & Admissions / Undergraduate / Why Stern / News / A Look Inside NYU’s Business of Entertainment, Media, and Technology Program, the Most Popular Minor on Campus
Share / Print

A Look Inside NYU’s Business of Entertainment, Media, and Technology Program, the Most Popular Minor on Campus

At NYU Stern, it’s no secret that we love acronyms. USWIB, SEAD, LBS, BPE: you get the picture. By far one of the most popular is the Business of Entertainment, Media, and Technology (BEMT) minor. Stern’s Entertainment, Media, and Technology (EMT) program launched in 1997 and today it houses the most popular undergraduate minor at NYU. Professor Al Lieberman, Executive Director of the program, joined NYU in 1996 with a mission: to fill a need he’d spotted in both the entertainment industry and in undergraduate business education. Prior to teaching, Professor Lieberman founded Grey Entertainment and Media and served as president of the company for over 12 years. Throughout the firm’s recruiting and hiring process, it became increasingly clear to Professor Lieberman that the entertainment and media industry had never addressed the need for the industry-specific training that their positions required; it wasn’t about “traditional business courses,” he said, it was about teaching students to think outside the box. Only a year after joining NYU Stern, Professor Lieberman and Professor Samuel Craig launched the EMT program, which would become one of the few in the nation wholly dedicated to the preparation of students for the entertainment and media industry.

According to Professor Lieberman, the EMT program was the first Stern program to focus on a specific industry and to bring together a cross-section of disciplines, covering a full spectrum from content creation to finance to management within entertainment and media. Given this new approach, there was some apprehension as to whether the program would be viable within a traditional business school where departments are generally organized by theoretical disciplines (e.g. finance or accounting). Yet the courses experienced immediate success, and students responded to the industry-specific nature of the program. Over time, the program has grown to include classes such as Mergers and Acquisitions in Entertainment and Media and Television Management, Sports Marketing, Movie Marketing, The Business of Broadway, The Business of Video Games, and so much more. 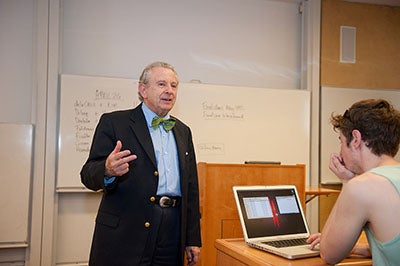 The first iteration of the program was centered around a course called Entertainment Marketing, which served as an introduction to interested students. Recently renamed Entertainment and Media Industries, this foundational course offering has grown to include eighteen sections at the undergraduate level and three sections taught at the graduate level. According to Professor Samuel Craig, the first section “filled up within an hour, so I asked if he [Professor Lieberman] would teach a second section and that filled up too.”

Hugely essential to the EMT program is its pool of exceptional and talented adjunct professors, made possible by our prime New York City location. According to Professor Craig, “We are very fortunate to have a group of over 40 adjunct professors who work in the industry and are committed to sharing their knowledge with our students.” These adjuncts are all senior industry executives outside of the classroom, who are experiencing and learning from the dramatic changes occurring in the field first-hand. Their presence in the classroom helps ensure that NYU students are cognizant of the latest developments. Adjuncts also provide students with a sound understanding of the industry, in addition to a breadth of knowledge surrounding the discourse behind entertainment. 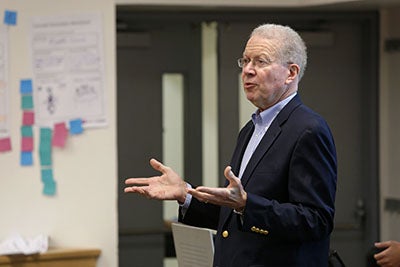 Professors Lieberman and Craig broke the mold by making their courses 2-credits and case-heavy. Instead of the more typical test-taking format, this structure allows students to read and work through real-world examples of the material. It’s these distinctive features of the program that has made the minor the most popular across the entire University. One such example of its experiential courses is the advanced class in Independent Film/Cinema, which offers students the opportunity to study the creative and operational processes behind independent films through full-access to the Tribeca Film Festival. Students have the unprecedented opportunity to directly pick the brains of film directors, producers, and even the founders of the festival, establishing connections in a way that most students have never experienced before.

Director of the EMT program Professor Paul Hardart said his personal goals for the program include, “foster[ing] more of a sense of community between undergrads, MBA students, and alumni.” To do so, student organizations such as the undergraduate Stern Tisch Entertainment Business Association (STEBA) are essential. STEBA acts as a hub for students to both find and offer mentorship, gain insight into the field, and make connections that are paramount to thriving in the entertainment and media world. The emphasis on collaboration is Stern student Paisley Millhausen’s (BS ‘20) favorite aspect of BEMT. “I’ve been able to meet so many amazing students and professors from not just Stern, but also Tisch”, Millhausen said. Since the industry is a relationship-based business, many of the relationships students make at NYU may lead to professional opportunities in the future. Professor Hardart believes that an education here means that “you’re not just getting a degree, you’re joining a whole, dynamic community of people who are interested in being involved in shaping the future of entertainment, media, and technology.” 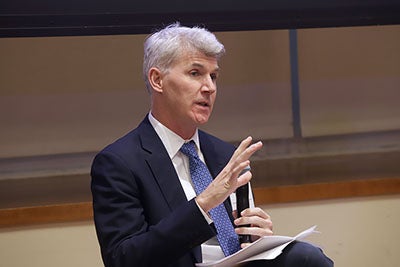 After twenty-three years, the program now includes over 100 sections of courses, spanning across both the undergraduate and graduate levels. The success and popularity of the program can also be attributed to its unique curriculum handling both the creative and the practical, a vibrant community bolstered by a powerhouse student club, and invaluable offerings from its professors. Professor Craig believes that the program will continue to evolve and grow to keep pace with the rapid changes in the entertainment, media, and technology industry. As globalization and new technological trends break down boundaries between industries, displacing businesses such as newspapers and broadcast TV, the EMT program embraces the challenge of staying at the forefront of change, as it has over the past two decades. 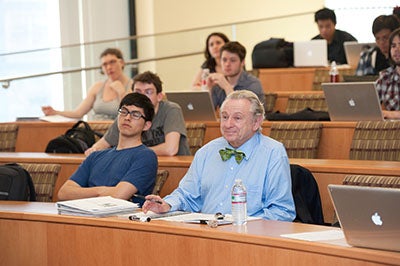 ---
Learn more about the EMT Program: